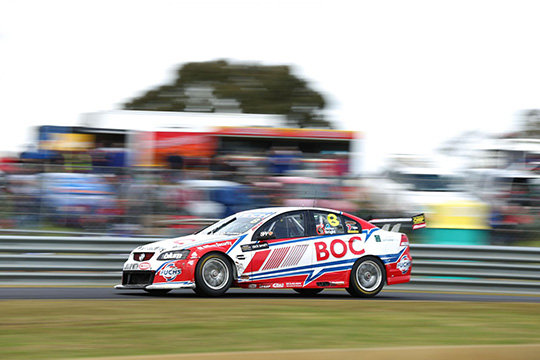 Bright, who is teaming up with Andrew Jones for the second consecutive year, says continuity should give them an advantage over teams running new driver combinations.

Last year the Bright/Jones duo finished fifth and are looking to improve on that, saying the team is in much better form this time round.

Ticket holders are not ruling out a sell-out crowd for this milestone event, the final time Holden and Ford will battle it out before two new manufacturers join the field next year.
Bright and endurance co-driver Jones will be on track from 10.40am this Thursday (October 4).

Jason Bright
Team BOC
“The team is in a much better form than last year. Even though we finished in the top five, we are in a better position this year and are heading in very strong and full of momentum.

“I can confidently say that we are definitely ranked as a main contender and if our strategy succeeds and we stay out of trouble we should bring home the silverware.

“I did some calculations and this year it’s been 30 years since I first attended a Bathurst 1000 race. My father first bought me to the track when I was eight and we watched the race from the mountain”.

Andrew Jones
Team BOC Co-Driver
“To line up on the grid for this 50th year milestone, it’s very special and I feel privileged to be Brighty’s co-driver for the second year.

“With all due respect the car was off the pace last year even though we came home in P5. This year we are much quicker and we will definitely be mixing it up with the front running teams.

“Obviously whoever wins this year will definitely stamp their name in the history books. But growing up in the Jones family, a Bathurst win means a lot to all of us regardless of it being the 50th year”.