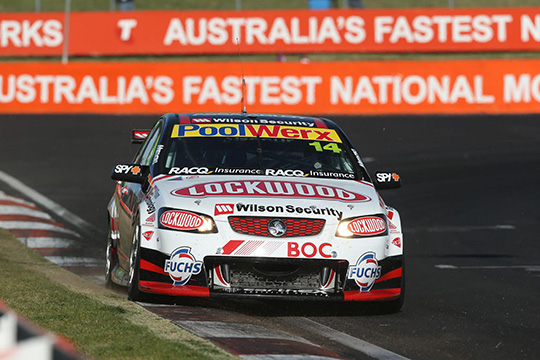 Muscle power and some nifty driving got Lockwood Racing’s Fabian Coulthard up to fifth in today’s Top Ten Shoot-Out at Bathurst despite a shaky start to his lap.

Coulthard’s final sector was the fastest of the session and his middle sector was the second fastest by 0.01s, allowing him to regain some of the 0.4s he gave away at Turn One.

The Kiwi, who was second in yesterday’s provisional qualifying, has had some bad luck at the Bathurst 1000 in recent years but says scoring his best-ever starting position at Mount Panorama is hopefully a good omen for tomorrow’s race.

The 50th anniversary running of the Bathurst 1000 will start tomorrow at 10.30am.

Fabian Coulthard
Lockwood Racing
“Getting the tyres up to temp was the biggest thing for us and obviously it shows because we started off poorly in the first sector and then got better and better until I got the quickest last sector.

“You only have one lap to do it though and you have to make the most of it. Overall I’m happy with the result; it’s the best qualifying position I’ve had at this circuit, and the most important thing was for the car to come back in one piece because the race is tomorrow.

“We need to focus on the race car now, and I’m pretty confident that we have a good one for tomorrow.”