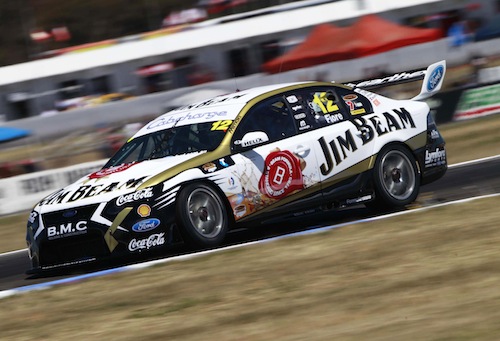 The four-car Dick Johnson Racing squad struggled with pace throughout qualifying.  James Moffat was unable to match his season best qualifying from yesterday, lining up on the grid in 16th.  Right behind the Team Norton DJR Falcon was the first of the Jim Beam cars, Dean Fiore in 18th.  Steve Owen’s V.I.P. Petfoods Falcon was next in 20th followed by the second Jim Beam car of Steve Johnson in 25th.

The first lap was a good clean one for Dick Johnson Racing with all four cars, on hard tyres, moving up at least three places.  Johnson had the greatest advantage moving up six spots.

The race for DJR was largely processional until a power failure for Moffat on lap 15 caused the Norton car off the road at turn 11.  V8 Supercars were quick to call a Safety Car, but Moffat was able to restart the car and return to the track.  The Yellow Flag triggered the first round of pit stops, DJR also taking advantage of short Safety Car period to pit all four cars.

Lap 28 saw Alex Premat tap the back of Johnson, sending the #17 car into the gravel, nearly collecting Tony D’Alberto in the process.  This pushed the Jim Beam driver to the back of the pack.  The day did not get better for Johnson, when he received a drive-though penalty for exceeding the speed in pit lane during the second round of stops.  This dropped him back a lap and he couldn’t regain position.

Fiore was maintaining a great position just outside the top 10 but his tyres could not hold out, with others on better rubber passing him in the dying laps.  He was the highest placed DJR driver at the end of the race in 14th place – his second best finish of the year.

Steve Owen, once again drove a consistent race, finishing the 200km in the same place as he began, 20th.

Despite Moffat’s power failure on lap 15, he managed to fight back through the field, coming home in 17th.

Johnson’s incident with Premat and his drive-through penalty put him into 27th place.

The final stop for Dick Johnson Racing as a four-car team in 2012 will be in two weeks time at the Sydney street circuit, for the Sydney Telstra 500.