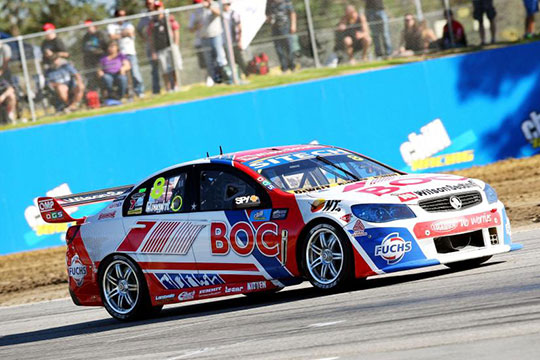 Currently competing in the Dunlop Series for Brad Jones Racing, Jones will share the #8 Team BOC Holden with Bright for a third consecutive season.

Jones hopes that consistency, coupled with the team’s strongest Championship start to date, will give the team its elusive first Bathurst win.

“Not just Brad but everyone within BJR wants our name on that trophy, and not just the Jones name but the team’s,” said Jones.

“Brighty has won there before and the last three years we’ve gone thinking we’re a chance, even if we weren’t as strong as we are this year.

“This year, you don’t want to count your chickens, but I certainly feel we’ve got the consistency and that’s got to help.

“It’s my third year driving with Brighty and I feel that my relationship with him is stronger and stronger each year and I really enjoy the time I spend with him at the races and away. We’re working together really well.”

Bright sits fourth in the Championship standings ahead of this weekend’s race in Austin, Texas, having scored three poles and two race wins over the first 12 races of the season and is cautiously optimistic after the team’s strong start.

“We’re obviously very excited about it. This year has proven so far that we should be in better contention than we have been previously. There’s no doubt this is the most competitive I’ve felt going into the start of the season so we’ll have as good a chance as anyone.

“For BJR to win a Bathurst and for the Jones name to be on the trophy would mean a lot to everyone there I’m sure.

“Brad tried very hard to get a win there; it’s the one thing that’s missing from his career. He probably cared a lot more about that than the Championship and he’s certainly always put a lot of emphasis on it.

“As a team owner I’m sure he’d get a lot of satisfaction from seeing one of his cars bring that trophy back to the workshop.”