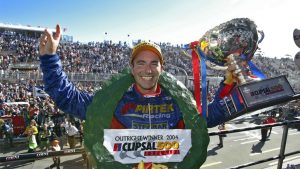 Two-time V8 Supercars Champion Marcos Ambrose will make his return to the series at the season finale in Sydney.

Ambrose had already announced his return to the category next year with Penske and Dick Johnson Racing after competing in NASCAR since 2006.

DJR Team Penske have confirmed that Ambrose will be contesting the Sydney NRMA 500 as a wildcard entry.

“Motorsport fans were blown away with DJR Team Penske joining the Championship so it’s fantastic to see Marcos is joining us earlier than expected in Sydney,” Warburton said.

DJR will use the wildcard entry as an opportunity to give Ambrose valuable experience in the next generation supercar before he competes full-time in 2015.

“This is a great opportunity to give Marcos a good hit out in one of the DJR Falcons before the Clipsal 500 next year. The Sydney NRMA 500 is an ideal hit way for him to not only get a feel for the car, but also an early opportunity to work with the DJR engineers and crew,” DJR Team Principal Dick Johnson said.

“With Marcos finishing the NASCAR series season at Homestead on November 16, we began to work hard on the Wildcard idea and it has paid off. As we continue ramping up our plans for 2015, this is a great way to give him real race miles,” Johnson added.

“I am really pleased that DJR has been able to put the Wildcard deal together for Homebush. I have never driven there, so it will be not only a bonus to do some really good long races, but it also gives me a good look at the track,” Marcos Ambrose said from his base in the USA.

“It will be a fantastic way to kick off our preparations for DJR Team Penske in 2015 and I am really looking forward to getting stuck into it!” Ambrose concluded.