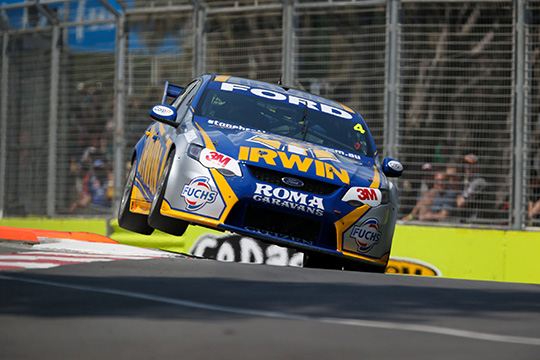 Despite an overnight repair job, that was only finalised ahead of qualifying this morning, IRWIN Racing’s Lee Holdsworth and French co-driver Simon Pagenaud have finished eighth in today’s second race of the Armor All Gold Coast 600.

It was all hands on-deck after Pagenaud was involved in a start-line accident in yesterday’s opener. The entire Stone Brothers Racing operation, including team owners Ross and Jimmy Stone, took to the task of repairing the IRWIN Racing Ford for today.

The crew called it quits at 3am, but were back at the track for breakfast and completed set-up work on the Ford prior to qualifying just after 11am.

A disrupted qualifying session, due to five red flags, saw the IRWIN Ford start 15th. After a clean getaway Pagenaud got on with the job, but did report a vibration in the front of the car. A timely Safety Car on lap #13 allowed the crew to change all four tyres and fill the car with fuel. It was quickly established the vibration was from a buckled front left wheel after striking a curb.

Pagenaud stayed at the wheel through to lap #35 when Holdsworth took over through to the finish. In a game of strategy, Holdsworth moved forward through the field and even sat as high as second when he made his final stop on lap #66 of #102.

In a race that totalled five Safety Car periods, Holdsworth was able to make the most of the speed in the IRWIN Ford to move back to eighth place at the finish.

The IRWIN Ford will head back to the team’s Yatala workshop tomorrow in South-East Queensland to be stripped back for a total repair. It will then be prepared ahead of being loaded onto an aircraft for the next round in Abu Dhabi on Saturday.

What the drivers had to say:

“A stellar effort to get the car back on the track by everyone at Stone Brothers Racing,” said Holdsworth.

“To have a really good race car was just brilliant.

“Yesterday was such a shame as we not only lost the car for the race, but also the information from running that race. It really would have set-up us up for a stronger run this morning in qualifying.

“We learnt a lot from the qualifying session, although we didn’t post the time we wanted. We made some changes after qualifying and it was spot-on for the race.

“I really wanted to get a result with Simon again this year, but I hope he’s keen to come back because he’s right at the top of my list.”

“Congratulations to the boys for getting the car back together as from what I saw it was destroyed,” said Pagenaud.

“The car was really good to drive and I enjoyed my time at the wheel.

“I have to say Lee is like a rocket ship at the wheel. He had a fantastic drive and got us up to eighth.

“I’m really happy with the result after the situation we faced after yesterday’s race.

“It’s been great teaming up with Lee again and I have enjoyed driving the IRWIN car. I would be more than happy to come back with Lee again next year.”