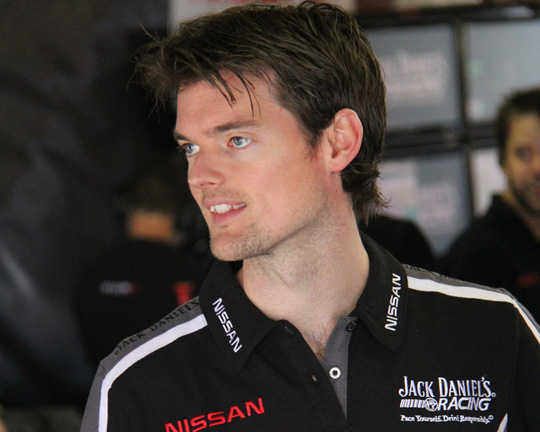 Buncombe, who raced a Nissan GT-R on the Mount Panorama circuit in this year’s Bathurst 12 Hour, got his first taste of the Nissan Altima as part of the Nismo Global Driver Exchange program at the V8 Supercars pre-season test day at Sydney Motorsport Park in February.

After impressing the Nissan Motorsport team with his ability to adapt to the car and his recent performances in the 2014 Blancpain Endurance Series, which included victory in the Pro/Am class at Silverstone last weekend, the 32-year-old Englishman got the nod to compete with Kelly at the Sandown 500, Bathurst 1000 and Gold Coast 600 events.

Buncombe will miss the final round of the British GT season at Donington to race at the Sandown 500.

“What an amazing feeling to get the call to say I’m required to drive again in Australia,” said Alex Buncombe.

“I really want to do a solid job for the team. I haven’t had many laps in the car so the first job for me will be to get on the pace.

“It’s totally different to what I have been used to in Europe with the GT3 GT-R but that won’t be a problem I’m sure.

“It’ll be great to go back to Mount Panorama. It’s an extremely scary circuit but what an amazing place.

“To go there with the GT3 car was awesome. It was a shame the race ended the way it did but going back there in the V8 Supercar is going to be an amazing experience .

“I can’t imagine what it will be like to drive that car on that track so I just hope I can do a good job for everyone.

“I’ll be asking Todd for every tip he has got to help me as he has so much experience in the car.

“I drove his car at the test and he really helped me to get the most out of it so I will be picking his brains again when I get to Australia for sure.”

“It’s really fantastic news for myself and Nissan Motorsport to have Alex (Buncombe) join us for the endurance races,” said Todd Kelly.

“I’m extremely pleased we’ve been able to grab him as an enduro driver.

“Not only because of his abilities and skills, but it just reinforces our relationship with Nissan Australia, Nissan global and the NISMO Driver Exchange Program.

“It’s going to be a pleasure having Alex on board for the three rounds probably the three most important events of our season.

“He drove the Nissan GT-R at the Bathurst 12 Hour earlier this year, so he has experience at Mount Panorama and that is a huge bonus when getting an international driver in one of our cars at Bathurst.

“He was very fast in the GT-R, so I’m confident he’ll adapt quickly to the Altima there.

“Alex also did a few miles in my car at Eastern Creek at the pre-season test in pretty average conditions it was a little bit of a wet track and dry track and he did a really good job.

“He’s almost the perfect fit for my car too he’s almost identical size to me, he didn’t want to tamper with any of my stuff in the car. That is very handy.

“He is a very, very experienced driver, especially in the endurance-type events.

“He is able to drive around as fast as he possibly can and at the same time taking absolutely minimal risks. Looking at a lot of the racing he’s done, he certainly knows how to get any car around and pass cleanly.

“He’s highly credentialed, a good guy and I can’t wait to get him in the car and see what he can do.”

The Pirtek Endurance Cup opens with the Wilson Security Sandown 500 from 12-14 September, followed by the Supercheap Auto Bathurst 1000 from 9-12 October and the Gold Coast 600 on the streets of Surfers Paradise from 24-26 October.