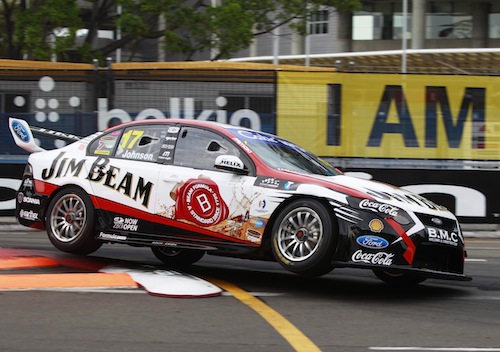 The 20 minute qualifying session this morning was marred by three red flags, making it difficult for the whole field to complete a run of fast laps. James Moffat was the most fortunate, qualifying the Norton car in seventh place. He was joined in the 10 by Steve Owen’s V.I.P. Petfoods Falcon.

The start of the final Ford v Holden battle was always going to be tough with many teams determined to go out on a high. The absence of the usual front-runner in the Top 10 also provided extra motivation.

The start of the last race the 2012 Championship, was clean one for DJR, with all drivers making up places off the start.

A racing incident between Moffat and Winterbottom on the first lap, earned the Norton driver a drive-through penalty, taking him from fifth to the back of the pack.

“I don’t think I turned him into the wall,” said Moffat, “so I’ve got no idea why I received a drive through. Lowndes squeezed me, which he was entitled to do, and I had nowhere to go. It just wasn’t our day once we had that drive-through.”

A racing incident for Dean Fiore saw the West Australian return to the pits for damage repair and the team were able to send him back out only a few laps down.

“I got a pretty hard knock in the opening laps, breaking the rear roll bar which punctured the rear tyre. We changed the tyre and went out there again but it punctured that tyre as well. We had to pit and pull the roll bar off entirely and run the front bar on full soft and the roll centre right up. We ran the rest of the race without a rear roll bar. But at least we finished and only had one DNF all year. I’m looking forward to working on Car of the Future with my crew now and rolling out at Clipsal ready to go,” Fiore commented.

Moffat’s luck did not improve, running straight into a stopped David Wall. The front-end damage was severe and Moffat was forced to spend 4 laps in the garage whilst the crew repaired the Falcon.

“I tee-boned Wall after he stopped on track and had to come into the pits to replace the front bar and it smashed all the break ducts which meant the brakes weren’t that flash for the rest of the race,” Moffat said after the race.

Once Moffat and Fiore returned to the field, the race settled down for Dick Johnson Racing, with Owen and Johnson holding positions 10 and 11 respectively. Fiore and Moffat would sit in 22nd and 23rd.

In the final stages of the race, as the teams closely monitored the rain radar, saw drivers drop back through the field with fuel issues. Both Owen and Johnson hung on and scored the team a double top 10 finish.

“I just wanted to get to the end and finish in the top 10, which we did. In the middle stint, with people out of sync coming out of the pits on cold tyres and I wasn’t able to get passed them cleanly into turn one. Sometimes it took me half a lap. It felt like I was playing catch up all day! But getting a couple of DJR cars into the top is great and we’re all definitely closer to the money, which is positive. We’ll have to wait and see what happens with the new cars next year,” said Johnson.

“It was the same plan as yesterday, stay out of trouble and keep the car straight. We did try that yesterday but we got caught up in a little incident with a teammate, which put us back a few spots. Today, it went to plan and we got a top 10 finish. It was a good solid result for the team with Stevie J in the 10 as well,” Steve Owen commented on his eighth place finish at Homebush.

With preparations for the new Car of the Future well underway at DJR, the team will now head back to the DJR workshop in Queensland.

We would like to take this opportunity to wish you all a very safe and Happy Christmas and New Year. We look forward to seeing you all next year when we head to Clipsal with the brand new Car of the Future.