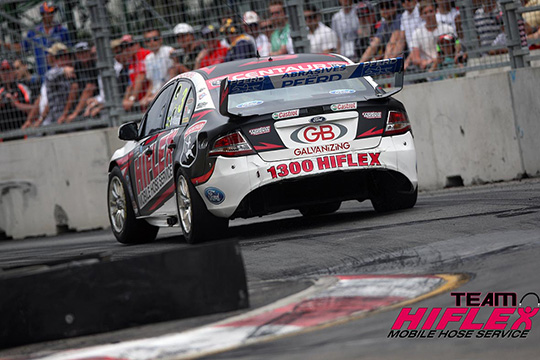 The Sydney Telstra 500 turned out to be a case of ‘what could have been’ for Tony D’Alberto and Team HIFLEX this weekend.

The #3 Ford Falcon had speed to burn over the weekend, and D’Alberto made a fantastic start to the weekend, qualifying 10th in Saturday’s qualifying before improving to seventh in an exciting Top 10 Shootout.

After a frantic start to the race, D’Alberto was involved in a number of passes before a side to side contact with Shane van Gisbergen saw the officials hand D’Alberto a controversial drive through penalty.

D’Alberto got back in the groove and started his march through the field before another collision, this time with Wilson Security Racing’s David Wall. The clash saw D’Alberto have to execute another drive through penalty, leaving him at the tail of the field.

With plenty of speed on board his #3 Falcon, D’Alberto drove seamlessly through the pack, making his way back inside the top 10, despite already having driven through pit lane five times (including penalties and pit stops).

To make it to the finish, D’Alberto was forced into pit lane to take a splash of fuel – his sixth stop for the race – leaving him to finish a fighting 12th.

Sunday’s qualifying saw D’Alberto qualify 20th, but a result went begging in the early stages of the race when he lost fourth gear in his Falcon.

The mechanical issue saw him park his Team HIFLEX Ford in the garage after 29 laps.

“Saturday was looking very promising for us, but I feel we were dealt harshly by the stewards call on the opening lap,” said Tony D’Alberto.

“Van Gisbergen had passed me the corner before, and I’d got him back down the straight. I was making the move on him, and he was being very ambitious trying to hang on the outside. I lost vision of him, and he bounced off the wall and into my car. It was a bad call, and if anything, they should have reviewed it after the race, rather than making such a clear cut decision straight away. It destroyed our race and it took me about 100 laps to cool down!

“Then I got another drive through, which was fair enough, but we had good speed and got back into a good position.

“We were very close on fuel at the end. We could have run the risk, but we didn’t want to. By pitting, we only lost a couple of spots. If we’d run out of fuel, it would have been a DNF and got no points. We played the safety game.

“The car had very good pace during the race. It held onto its tyres really well, which is something we’ve been trying to work on for this weekend. We probably struggled early in the stints, but when the tyres went away, we just kept coming past them.

“On Sunday, we bent a steering arm in qualifying, and that hurt us.

“In the race, the gearbox went. I tried to nurse it, but it wasn’t going to happen. It’s pretty terminal when that goes. There’s no quick fix, so it’s all over.

“Looking back at the 2012 season, I feel we had a lot of promise. When you look at where we finished in the championship, it’s almost surprising where we ended up. In my mind, we had such a better year than last year. We didn’t get the reward we deserved.

“The speed was good. A lot of top 10 results in qualifying, and that was nice, but some of the results, especially around endure time, didn’t go our way. The big shunt at the Gold Coast hurt our momentum, but speed wise, we can’t be too unhappy.”

“We had a good run here in Sydney, but things didn’t go our way to get the result we were looking for,” said Al D’Alberto.

“I think that we have made a lot of progress in the team, and we were definitely encouraged with our pace during the majority of the season.

“Through no fault of our own, we didn’t finish as many races as we should have which is what hurt us.

“Overall, we’re happy, and we’re looking forward to getting into the 2013 season.”