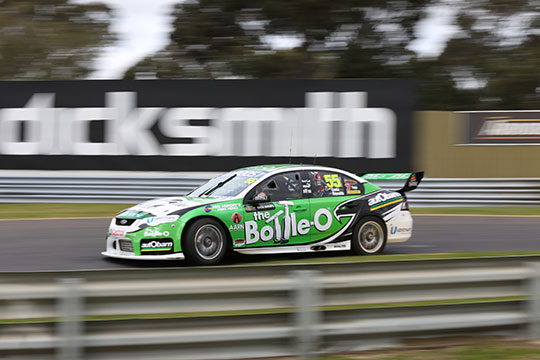 Ford Performance Racing endured a day of mixed fortunes with David Reynolds and Dean Canto securing a front-row start for tomorrow’s Sandown 500 while championship challengers Mark Winterbottom and Will Davison were taken out of contention by some crazy driving.

Reynolds and Canto kept it clean in their two 20-lap qualifying races with Canto finishing third and Reynolds second.

The #5 Orrcon Steel FPR Ford combo of Winterbottom and Steve Richards had a day to forget with a disastrous race one where Richards was taken out on the opening turn, relegating him to the back of the field.

He recovered into the top 20 but the car was later excluded after the team committed a rule breach in the post-race lockdown.

Winterbottom started the race at the rear of the grid though smart driving lifted him to 16th where he will start the 500km race.

McIntyre largely had an issue-free race though Davison was also in the thick of the action. An early mistake dropped him from second to the midfield and while he was staying out of trouble he was hit by two other cars which broke his steering and forced him to stop for repairs.

He ended the race second-last which is where he will start the race.

Earlier in the day Davison broke the lap record to claim provisional pole in qualifying which set the grid for the first of the two qualifying races.

Davison negotiated the traffic to set a benchmark 0.3s under the old mark. Reynolds struggled early to find a clean lap before a late flyer put him fifth.

Winterbottom looked set to join Davison on pole but couldn’t find the space needed when it counted to stay out front and was forced to settle for sixth.

“I was an innocent bystander minding my own business at the start of the race when I got turned around which certainly wasn’t in our plans. However, these incidents happen when you get some drivers that are only in it for their own selfish reasons and not for what is best for their teams and the rest of us, they are just in it to make a names for themselves. A couple of those drivers made names for themselves for all the wrong reasons.”

“It was a day that didn’t go to plan for all of the top three championship contenders so while we would’ve liked to take advantage of that we at least minimised the damage. Tomorrow is going to be a big day. The car is great and if we overcome our starting position we are still very much in with a chance given the speed we have. We start ahead of Whincup but there is still half the field ahead of us. Endurance races are tough and if other people can avoid running into us we should be okay.”

“You are never happy when you start first and don’t finish there but we still got good points for Will. I let (Luke) Youlden past heading into Dandenong Rd as it was a bit too risky as we didn’t need to do anything stupid or take him off the road given the big race is tomorrow. Rear tyre life hurt me late in the race though we dialled that out in the break so Will would have a better car. The car was quick and overall it wasn’t too bad.”

“I am really shattered about today as we qualified on pole and we’ll basically start last. I made a mistake early when I was second which was dumb and that put me back in the pack where I encountered some of the worst driving I’ve ever seen. I was driving with a bunch of lunatics and trying to stay out of trouble but James Moffat made a ridiculous move which pushed Lee Holdsworth into me and broke the steering. The car is super-quick though we just need to make sure we can get through the pack cleanly tomorrow. If we are smart we can salvage a big result.”

“I got a little bit of a dent in the door at turn one but I was on the inside so I plead innocence. It was a fun race and on the first lap quite a few people were caught out by something on the track at Dandenong Road but overall I kept my nose clean. John McIntyre had a bit of a slide and I just avoided him. Prior to that we caught the Stone Brothers car early but I made a little downshift error on the second-last lap and dropped to third but other than that the car has good pace and that put Dave in a good place for his race.”

“To start on the front row is ideal for tomorrow and will give whoever starts a clear run to the first turn. My race went well and the car is quick. I made a few small mistakes but so did a lot of other people as it was pretty tricky out there. The track was greasy in areas it wouldn’t normally be but overall it is a good result, I avoided the chaos and after what happened to my team-mates I have to be thankful.”

“We are really pleased that Dave and Dean could show how well our cars are running but if it hadn’t been for some of the most idiotic driving I’ve seen in quite a while we would’ve had our other two cars up there as well. Will and John did a great job and despite Will’s error putting him in the midfield it was only a brainless move by Moffat which took him out. Frosty and Steve suffered a similar fate though we also made an error which made it harder for them so we apologise for that. To have both our championship contending cars starting in the back half of the field is clearly not ideal but we know we have the car speed and a lot of laps to get back to where we should be.”