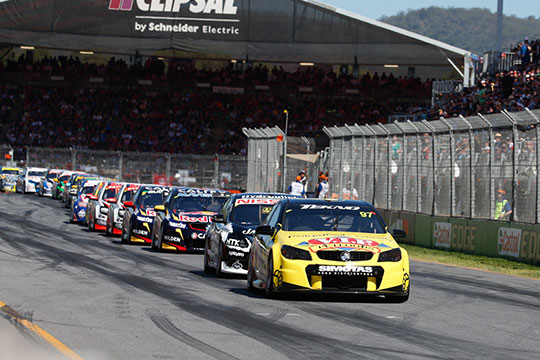 The V8 Supercars Championship has released its official 2015 calendar, with minor format modifications and two signature events returning to their customary race distance the only notable changes in the schedule.

The 16-event schedule remains largely unaltered from this season. All 16 venues used in 2014 retain their place on the calendar with the compulsory Sydney Motorsport Park pre-season test getting proceedings underway in February.

The pre-season test has been expanded to two days over the February 7-8 weekend confirming the controversial clash with the Bathurst 12 Hour. Sunday’s schedule is set to include a new ‘SuperShootout’ featuring a timed lap, a pitstop for tyres and a closing lap for each car, with the fastest time winning the contest.

New Zealand remains the only international V8 Supercars destination following the agreement to terminate the contract with the Circuit of the Americas, but the ITM 500 Auckland returns to its traditional November date as a SuperSprint event.

The Castrol Townsville 400 returns to its original 200km race format each day, after an extra 50km was added to each race for 2014.

The Clipsal 500 Adelaide and Sydney 500 at Sydney Olympic Park retain the 2x125km Saturday format, as daytime races, while the Super Sprint format featured at eight rounds continues to be made up of two SuperSprint races on Saturday and a 200km Sunday finale.

“The emphasis was on improving the racing product, and giving drivers the opportunity to attack at all times without external factors preventing them from being aggressive.”

Each SuperSprint event will also include 120 minutes of Friday practice to incorporate team testing. Teams will be able to test at these eight SuperSprint events with one discretionary private test.

“It made sense that instead of testing away from the fans to combine Friday practice and allow teams the ability to adopt testing procedures as required,” Warburton said.

“That achieves two key objectives: more V8 Supercars on track for the fans and reducing the high costs to teams of testing away from race meetings.”

The support slot at the Australian F1 event at Albert Park remains listed as a non-championship event, although its understood discussions to make it a points paying round are ongoing.

*Non championship event and date to be confirmed