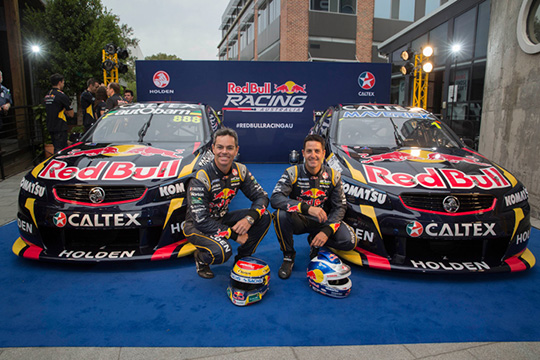 Red Bull Racing Australia has revealed the livery it will run for the 2014 V8 Supercars Championship ahead of the opening round of the new season in Adelaide.

2014 year marks the second year with Red Bull and the two entries will continue to race in its familiar colours with increased branding from petrol retailer Caltex.

Five-time Champion Jamie Whincup and three-time Champion Craig Lowndes have teamed up for a ninth consecutive season and are looking to defend the team’s 2013 one-two team championship finish this season.

Whincup will be chasing a record sixth V8 Supercars title this year and told V8Supercars.com.au that he’s feeling positive about the season already.

“I don’t have any predictions,” Whincup said.

“Of course, I only know what’s going on internally with my team, and all I can say is there’s a really, really good feeling that takes me back to 2008-9 [when he won consecutive Championships].

“We’re not trying to do too much, there’s a lot of concentration on two cars … there’s a really good feeling for me in the team, which I hope we capitalise on.” 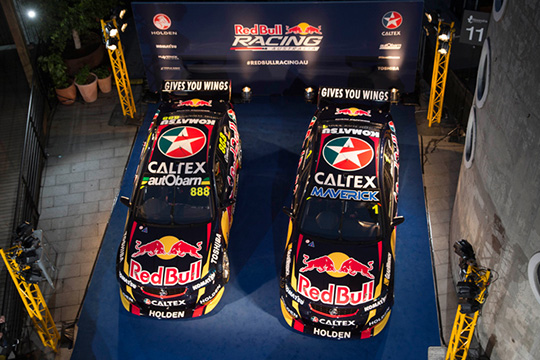 Poor qualifying in 2013 cost Lowndes the title, and the 39-year old knows he will need to improve to win back the championship title from his teammate.

“The one element we have to step up from last year is our qualifying,” Lowndes told V8Supercars.com.au.

“Everyone’s going to be closer in times, so every element is going to have to count.

“I was very satisfied last year because we were able to finish every race of this Championship, and we were the only car to do that.

“The reliability’s there, we race well, obviously always come back through the field when we qualify poorly –but the problem is, when you start too far back you play the catch up game.

“You can’t afford to do that.”