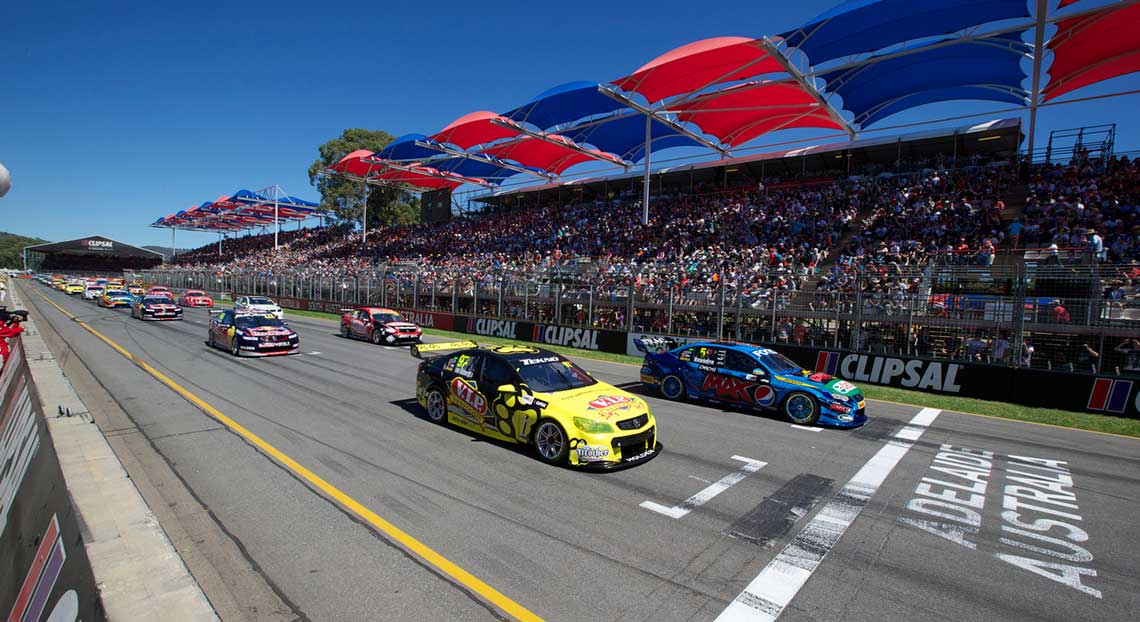 In an effort to further broaden the appeal of V8 Supercars and make it accessible to more people than ever, V8 Supercars CEO James Warburton has made some sweeping changes for 2014 with race formats overhauled and twilight races the headline transformations.

After shaking up the 2013 race format and introducing a variety of race types and tyre allocations designed to mix up the racing order and provide fans with lots of exciting drama, V8 Supercars have moved to a more simple race format structure, with just three formats making up the calendar.

The SuperSprint format introduced in 2013 remains, but gone is the much-maligned 60/60 Saturday race and the two 100km races on Sunday, replaced by two 100km races on Saturday, and a single 200km race on the Sunday that will include pitstops for tyres and fuel.

Championship points and podium results are awarded for all three races.

Eight of the 14 points paying championship rounds feature the SuperSprint format – the Tyrepower Tasmania 400, the Winton 400, the ITM 500 Auckland, the Perth 400, the SkyCity Triple Crown Darwin, the Coates Hire Ipswich 400, the Sydney Motorsport Park 400 and the Sargent Security Phillip Island 400.

Two separate 100 km races make up Saturday’s races. There is no re-fuelling in either of the two races.

One 200 km races then take place on Sunday, which includes pitstops for tyres and fuel. All teams must put in a specified amount of fuel during their refuelling stops. This regulation (introduced at the 2013 Gold Coast 600) was brought in to address fuel consumption differences between manufacturers seen last season.

Saturday’s back-to-back qualifying sessions are now just 10 minutes each, with V8 Supercars looking to minimise the time that cars spend in pitlane.

Each round includes three practice sessions of just 20 minutes each on Friday. Unlike 2013, all drivers take part in all three sessions, but in a bid to reduce costs for teams, significant cuts to track time means co-drivers will not get any track time.

Three rounds form the SuperStreet events – the Clipsal 500 Adelaide, the Sydney 500 and the Castrol Townsville 500 (which has extended from 400 to 500km with each leg increasing by 50km to match the two 250km race format used at Adelaide and Sydney).

Two separate 125 km races make up Saturday’s races. There is no re-fuelling in either of the two races. One 250 km race then take place on Sunday, which includes pitstops for tyres and fuel. All teams must put in a specified minimum amount of fuel during their refuelling stops.

Qualifying for the Clipsal 500 Adelaide consists of two 15 minute sessions on Friday to set the grid for Saturday’s two races. Sunday’s race three line-up is determined by a 20 minute session on Sunday followed by a Top-Ten Shootout, where the fastest ten qualifiers complete one flying lap each to determine the top ten on the grid.

Qualifying for the Sydney 500 and the Townsville 500 rounds consists of two 10 minute sessions on Friday to set the grid for Saturday’s races. To determine the race three line-up, a 20 minute session followed by a Top-Ten Shootout takes place on Sunday.

The Clipsal 500 includes three practice sessions of 30 minutes on Friday, followed by a fourth 30 minute session on Saturday.

Both the Sydney 500 and the Townsville 500 events include three practice sessions of 20 minutes on Friday and a fourth 20 minute session on Friday.

Introduced in 2013, the Enduro Cup is awarded to the pair of drivers who accumulate the highest points tally across V8 Supercars’ three long-distance races, the Wilson Security Sandown 500, the Supercheap Auto Bathurst 1000 and the Castrol EDGE Gold Coast 600.

The Sandown 500 and the Bathurst 1000 require the co-drivers to complete a compulsory minimum of 54 laps, and no driver can exceed 107 laps. The Gold Coast 600 requires that co-drivers do a minimum of 34 laps in each of the two races.

Qualifying for the Sandown 500 comprises of one x 20 minute qualifying session and two x 60 km ‘Qualifying Races‘ on Saturday.

The 20 minute qualifying session on Saturday is open to any driver and the results set the grid positions for the first Qualifying Race.

Qualifying for the Bathurst 1000 comprises of one x 40 minute qualifying session on Friday and a Top-Ten Shootout on Saturday to set the starting order.

Only the Sandown 500 and the Bathurst 1000 incorporate warm-up sessions.