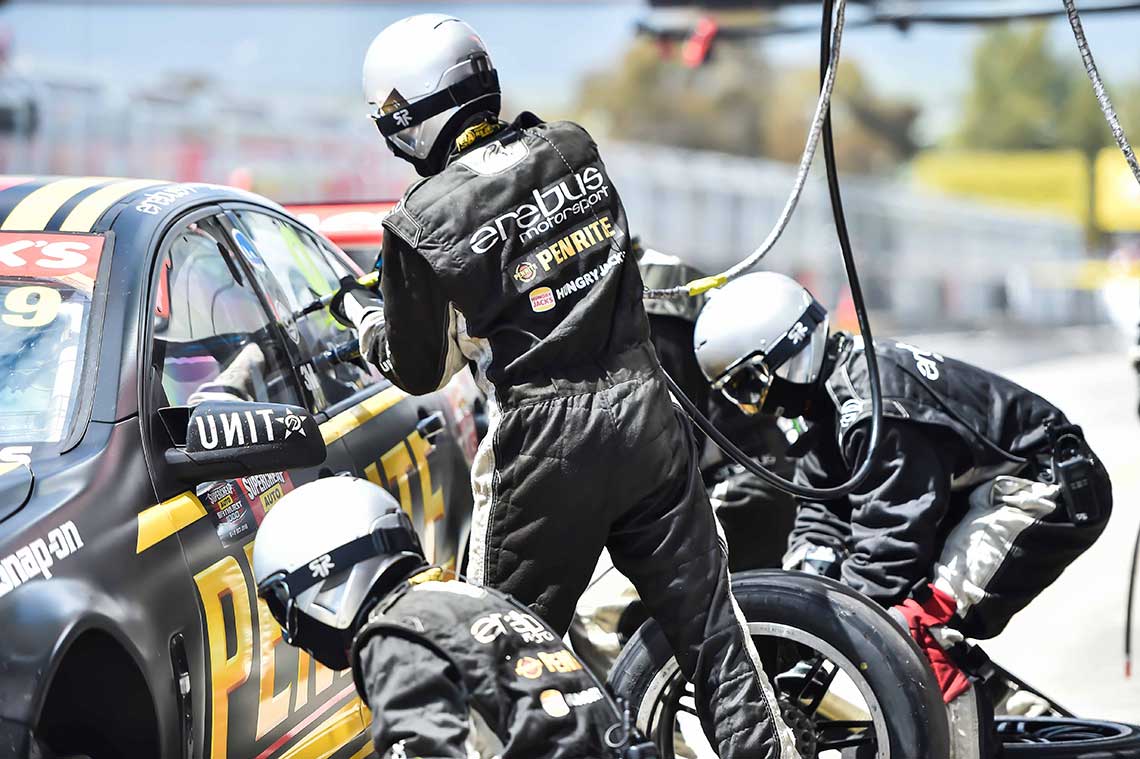 Having moved to a simpler format structure in 2014, the Supercars Championship will again feature the four key race formats in 2017 – SuperSprint, International SuperSprint, SuperStreet and Enduro Cup.

While 2016 saw the Supercars race formats refined to restore the excitement of the longer race and to bring pit strategy back into play, 2017 features arguably the most exciting development in the sport since the category’s shift to the Car of the Future era in 2013, with the introduction of a new type of tyre construction.

Referred to as ‘Soft’ and ‘Super Soft’, these new specification tyres differ in both size and construction to those used in 2016. The switch to the 2017 specification tyre represents a significant new technical challenge to the teams, but more importantly for us fans, is expected to further enhance the racing.

In 2017, all SuperSprint events, with the exception of the Phillip Island 500, comprise of one 120km race on Saturday and one 200km race on Sunday.

April’s Phillip Island 500 event is the exception. Extending to two 250km races for 2017, these are the longest single-driver championship races held there since the 500km end of season endurance races in 1976 and 1977. These longer races have also led to the revival of the Phillip Island 500 name.

Introduced in 2016, the shorter 120km SuperSprint race on Saturday features a compulsory pit stop for new tyres. However, 2017 sees a modification to the rules for tyre changes in the SuperSprint events. Teams are now only required to change two tyres, rather than all four as seen in 2016.

The two 250km races at the Phillip Island 500 include a minimum fuel drop of 140 litres. This means at least two pit stops during each race.

The new Super Soft tyres are used at all SuperSprint events with the exception of the Phillip Island 500 which features the new Soft tyre.

Each SuperSprint event incorporates 135 minutes of Friday practice, except for the Phillip Island 500 which is set at 80 minutes. Additional drivers are permitted to participate in these sessions. A further two 30-minute sessions, one at Winton and one at Ipswich, have been added for additional drivers only.

Qualifying for all SuperSprint events consists of one 15-minute session on Saturday and 20 minutes on Sunday.

The Darwin Triple Crown is the only SuperSprint event to feature a Top Ten Shootout, where the fastest ten qualifiers complete one flying lap each to determine the top ten on the grid.

The Formula 1 Australian Grand Prix event – the Coates Hire Supercars Challenge – still comprises of four 30-minute (13-lap) races with two on Friday and one each on Saturday and Sunday. It remains a non-championship event, but points are awarded across the four races, with the highest scoring driver declared the event winner.

Exclusively for this event, all four Supercars Challenge races begin under a rolling start. The cars initially follow the Safety Car around the circuit, lining up in two-by-two formation ahead of the start-line. The car in pole position dictates the speed, which must be less than 60km/h and more than 50km/h. All cars must be no more than one xar length behind the car immediately in front as they approach the apex of Turn 16. The race commences once the red light extinguishes, at which point it is permitted to overtake.

The Auckland International SuperSprint is now contested over two 200km races instead of four 100km races, following significant criticism of the short sprint race format at Pukekohe in 2016.

The four Supercars Challenge SuperSprint races are all non-stop runs contested on the new SuperSoft tyre. Each car is allocated four sets of the super soft tyre for the whole weekend, effectively giving drivers just one lap to set their best qualifying time for each race. The allocated tyres are marked with different colours – white for race one, yellow for race two, pink for race three, and blue for race four. Any combination of colours are permitted for use during the qualifying sessions.

The two 200km SuperSprint races in Auckland have a 120 litre minimum fuel drop, which require at least two pit stops to take on the required amount of fuel. Both races feature the new Soft tyre.

A new qualifying format has been introduced for the four races at the Formula 1 Australian Grand Prix Supercars Challenge.

Following a single 30-minute Practice session on Thursday, the Supercars have four 10-minute qualifying sessions to determine the starting order for each race. Breaks between Q1 and Q2 and between Q3 and 4 are just five minutes long, while a 15-minute break to allow refuelling is held between Q2 and Q3.

The new format replaces the 30-minute qualifying session and the progressive grid system used in previous years where each starting grid was based on results from the previous race.

The SuperSprint round in Auckland includes 80 minutes of Friday practice. Additional drivers are permitted to participate in these sessions.

Qualifying for the Auckland SuperSprint consists of two 20-minute sessions ahead of each race.

Three rounds form the SuperStreet events. The season opening Clipsal 500 Adelaide returns to the two 250km format after the Saturday race was split into two 125km races last year. The Townsville 400 remains at two 200km races. Replacing the now defunct Sydney 500 as the season finale, the Newcastle 500, the newest addition to the calendar comprises of two 250km races.

All three SuperStreet rounds include 80 minutes of Friday practice. However, the Clipsal 500 also includes an additional 20-minute session on Saturday. Additional drivers will be permitted to participate in these practice sessions.

Qualifying for all three SuperStreet rounds comprises of two 20-minute Qualifying sessions ahead of each race.

The Pirtek Enduro Cup format remains unchanged in 2017. The Cup is awarded to the pair of drivers who accumulate the highest points tally across Supercars’ three endurance rounds the Sandown 500, the Bathurst 1000 and the two 300km Gold Coast 600 races.

All Enduro Cup races require mandatory pit stops for tyres, fuel and driver changes. Teams need to complete a minimum of three pit stops at Sandown, seven at Bathurst, and two in each race at the Gold Coast.

The Sandown 500 and the Gold Coast 600 are run on the SuperSoft tyre and the Bathurst 1000 features the Soft tyre.

Qualifying for the Bathurst 1000 and Saturday’s opening race at the Gold Coast feature a Top-Ten Shootout.