This year sees the debut of the new generation V8 Supercar, the ‘Car of the Future’. New standardised components have been introduced to reduce costs, increase reliability, and make it easier for teams to compete on a more level footing.

While these advances for 2013 and the introduction of new manufacturers represent the biggest shake-up in the sport for 20 years, development is actually nothing new. In fact, V8 Supercars has been progressively introducing more and more control parts to achieve fairer racing and parity since 2003.

Back in 2010, V8 Supercars introduced the category’s first control wheel, a 17-inch Team Dynamics aluminium wheel manufactured by British wheel manufacturer, Rimstock. Now for 2013, Rimstock has been awarded the contract to produce the new specific 18-inch ‘Team Dynamics’ alloy wheels for the new generation V8 Supercar. The deal is a continuation of the current arrangement with Queensland firm Racer Industries, who import the rims from the UK.

A world-leading manufacturer of alloy wheels for the original equipment, aftermarket and motorsport arenas, Rimstock manufacture cutting-edge products for all formulas and supply products to many major vehicle manufacturers such as Aston Martin, Bentley, General Motors, Chevrolet, Jaguar, Lotus and Toyota.

V8SCGlobal caught up with Rimstock’s Company Director, better known to most as three-time British Touring Car Champion and former V8 Supercar endurance driver, Matt Neal to find out more about the Team Dynamics V8 Supercar wheel and his thoughts on the Series.

V8SCGlobal: Can you give us a little background to Rimstock?

MN: Rimstock is a British alloy wheel manufacturer employing 250 people and exporting to over 40 countries around the world. A lot of its production is sold to customers and branded with other people’s names, so it’s a pure manufacturing facility.
The brand that it sells itself under is Team Dynamics and that goes into passenger cars and motorsport, which is one of the marketing platforms it uses.
There are various factions of the business, making for the Ministry of Defence, motorsport, high-end, low-end, everything and touring cars is a big focus, whether it be Australian Touring Cars, British Touring Cars or World Touring Cars.

V8SCGlobal: Can you tell us about the features of the wheel and what specifications V8 Supercars asked you to meet with the tender?

MN:Performance is critical down there. That’s why they want to stay with the forged wheel. Weight is also a critical factor, keeping the un-sprung weight, stiffness and also impact resistance down because you’ve got 1600 kilo cars smashing the kerbs on the street circuits. [The un-sprung mass of a wheel and tyre assembly has a direct influence on the dynamics and performance of any vehicle. The higher the mass, the more energy is required to rotate the wheel and tyre. With forged aluminium, weight saving in excess of 30% can be achieved compared to similar designs of cast aluminium wheels.]
The last three years it’s been running the 17 x 11″ wheel but they’re now moving to the Car of the Future [COTF] for 2013 onwards and for that they’re moving up to an 18″ wheel. It’s still 11″ wide which is going to prove a bit tougher because they’ve got less protection from the tyre. The tyres are low-profile, but they’ve got bigger brake packages that they wanted to accommodate and you’ve got to move to an 18″ for that.

V8SCGlobal: How did the styling design come about?

MN: Styling design on the 17″ was a 12-spoke, multi-spoke design. It’s one of the strongest designs there is and we took that to them and recommended it to them. The 18″ is seven twin-spokes and they wanted an aesthetic change for the cars so the public could see they’ve moved to a different wheel and then they can talk about the 18″ wheel. It’s the one they wanted to work with, they liked that design and so they let us off the reins on it and we’ve worked with them to optimise that.

V8SCGlobal: You won the tender to manufacture the category’s first control wheel with the 17-inch rim. Is the new COTF wheel a continuation of that contract or did you have to re-tender?

V8SCGlobal: And is there an option in the agreement for a design change if required?

MN: Yes, mid-distance. It’s up to them whether they have it after two or three years and we’ll offer complete re-design, re-development and testing at that cost.

V8SCGlobal: What is the process involved to manufacture a V8 Supercar wheel?

MN: It’s forged aluminium, so you take a forged blank which gives you a basic pancake and that’s spun out to get the front and rear rim. Then it goes into five-axis milling machines and they’ll mill the spokes.
It’s a solid wheel, so the centre of the wheel is just a solid pancake. Then you mill the wheel out, which takes about an hour and three-quarters per wheel, so it’s a long process.
Then there’s other machining operations, drilling, a lot of statistical process checking along the way and then it just has a clear coat of lacquer to keep the weight down, plus they like them nice and shiny!

V8SCGlobal: Where would the differences lie between a V8 Supercar wheel and a British Touring Car Championship NGTC [Next Generation Touring Car] wheel for example? And why, if reducing costs has been a key focus of the Car of the Future, have V8 Supercars chosen to continue with the forged wheel if it’s a more expensive process?

MN: Both Championships are cost-orientated, they’re both looking at trying to cut costs. In British Touring Cars they go with a cast-aluminium wheel, so basically the difference is you’ll have a mould and you’ll pour molten aluminium in and it’ll solidify and set, so it’s a casting. They’re a lot cheaper to make so you cast them in the form, machining is a lot more minimal, it takes probably six minutes to machine a wheel, but you’ve got a high cost in the tooling prices. The BTCC wheel is probably about a third of the cost of a V8 Supercar wheel. 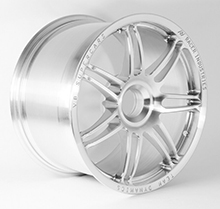 V8 Supercars want more performance out of theirs, they want them to be stronger for various reasons – the cars are heavier, they’ve got more load going in, they’ve got more torque, more braking. It’s the different attributes we’ve got to build for each, and they’ve both got their different strengths.
A forged wheel gives attributes that a cast-wheel doesn’t though – it’s stronger, it’s more malleable, when they do get some dents from the kerbs they can repair them more easily. If a cast-wheel cracks then you literally throw it away. We could’ve designed either, but BTCC wanted a cast-wheel for a price and V8 Supercars wanted the forged-wheel, so that’s what we made them.

V8SCGlobal: How does the relationship with Racer Industries work?

MN: We’ve got a partnership with Racer Industries to develop the products and offer a cost-effective solution for V8 Supercars – a good product which is financially more attractive to the teams and which performs on the track as well, and Racer Industries import that product into Australia.

V8SCGlobal: Do you still have an agreement in place for the teams to sell the rims?

MN: We’ve just produced a replica of the Team Dynamics V8 Supercar wheel for the road which a lot of the teams have taken up to go on their show cars and that’s just the 18 x 8.5″, so it can be used on track-days and such. We’re making them for the Falcons, Commodores and for the Nissan [Altima] and there’s a load on the water going there now.

V8SCGlobal: It’s been almost five years’ since you competed in the V8 Supercar enduros. Any chance we’ll see you in a V8 Supercar again?

MN: It would be nice, but people shouldn’t underestimate how competitive it is out there, it is massively competitive! The previous car [pre-COTF] was very difficult to get your head around and really jump into and be quick. What the new car will be like, I don’t know. It could be the same or it could be different, but people should not underestimate how big V8 Supercars is down there. I mean, it’s massive! If someone’s never been there and they’re into racing, touring car racing and everything, they need to go. The spectacle is second-to-none. It probably is the best touring car championship in the world and I would put it above DTM, everything. For the teams who are running in it, the drivers, the fans, the whole shooting match. It’s a pretty class act at the moment. That’s why it’s great for us being involved in the wheel-side. The last couple of years they’ve conflicted with our races, meetings have gone later in BTCC, obviously that’s my priority, but I feel like I’ve done it. It’s hard work down there, it’s on the other side of the world and I’ve still got priorities here so yeah, maybe I’ve had my turn on that one. I’m enjoying being on the wheel-side anyway!