The new V8 Supercar ‘Car of the Future’ represents the biggest change to the V8 Supercars’ technical regulations for 20 years.

Significantly, the regulations make the new generation car more of a contemporary racing machine than the previous model, and more in the image of the standard international touring car spec. Perhaps the biggest change beyond the introduction of a control chassis is the move from a “live” rear axle to a rear-transaxle sequential gearbox (transmission) driving the rear wheels.

Australian off-road racing specialist Albins Off Road Gear was the company chosen to build the new 6-speed sequential transaxle and for very good reason. At the forefront of drivetrain component design and manufacture, Albins has been a key player in supplying parts for specialist military and industrial vehicles as well as off-road vehicles for 25 years. Well qualified then to deliver on a product that can cope with the high-torque loads sustained by the V8 Supercars. 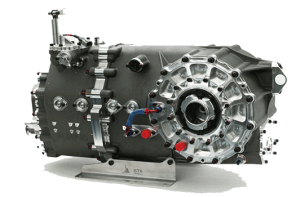 Primarily designed for the Car Of The Future, the ST6 transaxle system combines the functionality of the gearbox, differential and associated components of the drive axles in one integrated unit (as opposed to the traditional gearbox and then separate differential at the back), hence the term transaxle. Precision engineered it weighs in at 65kg and offers improved weight distribution and vehicle fitment. It also brings a significant increase in service life and ease of maintenance whilst delivering various performance advantages over the older technology.

Another key feature in the gearbox is the fitment of drop gear sets. These allow teams to make rapid gear ratio changes if required for individual circuits, and enable the same gear set and final drive (how many times the engine must turn to rotate the car’s drive wheel) to be run for the entire season.

The ST6 was on show to the European market at the 2013 Autosport International show in Birmingham (UK) in January and V8SCGlobal met up with Tim Possingham, export marketing manager at Albins and tarmac rally driver, to have a chat about what the new system brings to the table.

V8SCGlobal: Can you give us a little background to Albins and how the company came to be involved in V8 Supercars?

TP: Based in Ballarat, Victoria, near Melbourne, Albins was first started by Ivan Albins over twenty years ago. Ivan had a passion for off-road racing which involves transaxles and was heavily involved in that form of racing and developing and upgrading those early transaxles. Ivan still plays a major part in the company but the company now employs a highly skilled staff of around 40, with the latest technology and software in a large production facility.

Primarily, the core business is still off-road racing, developing gearboxes and other components for competitors in the likes of the Dakar Rally and the Baja 1000, but obviously with the learnings that come from developing gear products and drive-line products of that sort of application which has got extreme shock loads and extreme duty, we’ve collected a lot of techniques that we can apply to other sorts of racing disciplines.

Over the last decade or so, we’ve made the progression from off-road racing into some club-level circuit racing and then into the V8s, where for some time we’ve not only made gear and driveline products, but other componentry as well, because we have a full service engineering shop designing and manufacturing.

V8SCGlobal: Can you tell us about the features of the V8 Supercar transmission and what specifications were required to meet the tender?

TP: Probably the most significant prerequisite is its 5000 km maintenance. Ideally, the transmission is not to be removed or rebuilt for a 5000 km period. So, therefore, not only have we engineered something that will meet or exceed that criteria, it also incorporates inspection ports in the casing so you can regularly check wear and things like without having to remove the transmission from the vehicle; and of course all of this is focused on cost-saving. Incorporating the transmission and final drive into the one unit offers significant financial benefits to teams. Whereas in the past, you needed to repeatedly pull down and rebuild the transmission and change ratios for each track as well having to carry huge inventories.

The clutch unit is still located on the rear of the engine with the tail shaft operating at engine speed and feeding power into the gearbox which is essentially located just in front of the rear axle line.

Gear shift is via a rod attached to the gear lever within the cabin. Gear position is detected by a rotary potentiometer [a variable resistor] on the gearbox and displayed on the dash for the driver.

Drop gears at the front of the transmission have been utilised to facilitate “quick changing” of different overall transmission ratios for individual circuits, leaving all other gears, including the final drive fixed. This feature means a reduction in the amount of spare components the teams require, as well as the reduced labour in changing the gears for each track. An internal oilpump, filter and cooling system is also integrated into the unit which lubricates and cools the critically loaded parts of the transmission.

V8SCGlobal: Can you tell us how the transaxle with its independent rear suspension functions, and, how it differs from the spool differential or “live” rear axle design used previously and how that will assist with the quality of the racing?

TP: One of the biggest cost-savings for the teams with this transaxle versus the live axle rear end is that the fabricated live axle rear end was actually a very, very expensive component and relatively easily damaged. Contact with a wall or something like that will bend the diff-housing and it’s a fairly substantial component. So there’s cost-savings there, but obviously we can run the independent rear end and so there’s some better suspension geometry and better weight distribution through the vehicle. And there’s some sort of vehicle dynamic benefits as well as cost saving by having the transaxle at the back.

Previously, V8 Supercars used a spool differential and “live” rear axle design which meant the rear axle acted as one piece. This allows a straighter launch of the line as the power is split evenly between the rear wheels but makes cornering slightly more difficult as the outside wheel has a greater distance to travel than the inside wheel and therefore has to rotate faster. With independent rear suspension the rear axles are separate and free to move irrespective of each other. The new Albins transaxle still uses a a spool type differential at this stage, as requested by V8 Supercars Australia. We have an innovative LSD [limited slip differential] product for this transmission but it is not being introduced at this stage.

V8SCGlobal: The V8 Supercar transmission was designed to endure high-torque loads sustained in long endurance races, but the new 60/60 super sprint format introduced for 2013 means the drivers won’t be able to let up at all like they might be able to over a longer race. Is there any concerns about this?

TP: No, not at at all. In the testing programme that the transmission underwent, they actually do what could be termed ‘abuse tests’ on the transmission and we’d be very confident in putting the transmission forward in that sort of circumstance and it delivering on all fronts. It’s been designed to endure high-torque loads sustained in endurance races of over 1000km and to be integrated within other vehicle categories and specialist car constructor projects.

V8SCGlobal: During V8 Supercars’ own COTF prototype testing program and again during the team testing, there were reports of gearbox cooling issues. Can you tell us has this been resolved and what steps were taken to deal with the problem?

V8SCG: The initial feedback has certainly been good. Jonathon Webb said after steering the Triple Eight Race Engineering’s Commodore VE in its second test at Queensland Raceway: “There’s definitely some cool innovations. The gearbox is one of the better things.” You must be pleased with that? But is there any trepidation ahead of the first round in Adelaide?

TP: Yeah, we’re wrapped. Most teams are really pleased with it and we’re looking forward to the first round in Adelaide. In over 5000 km we only logged two mis-shifts on the transmission and those mis-shifts were deemed to be driver-error as well. The shift event times on this transmission were a fraction of what teams have been experiencing with other transmissions in the past. It’s significantly faster on the shift, which of course is going to make faster times.