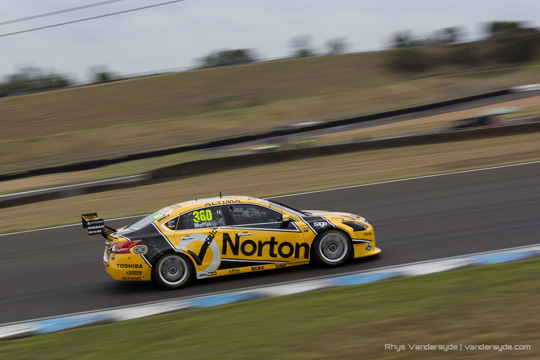 Here at V8SCGlobal, we get some fantastic photographs sent in from both team photographers and fans alike. Over the past year, we’ve shared some of those images with you in our gallery, but we thought we’d go one further and get two of our favourite motorsport photographers – Keith McInnes and Rhys Vandersyde – to share a few tips and tricks on getting the most out of your camera and bagging some great shots, whether it’s with a high-end digital SLR, a compact point-and-shoot camera or even a mobile phone!

All the circuits that are used by the V8 Supercars have areas where it’s possible to take a shot of your favourite driver on track without having the view of fencing between you and the car and Sydney Motorsport Park is a great track to take photos. For the most part, the spectator areas are raised above the track and the fences are low enough that they won’t obstruct your view; it gives you plenty of places to get a good view of the action.

Turn 1 – Outside
Turn 1 on the hill is a great place to catch the race starts as the whole pack heads towards the turn from the start/finish straight (especially if you don’t have Grandstand tickets). If you stand down towards the start of the old Eastern Creek Drag Strip (from before the purpose built drag strip was built over the road) you can see all the way down the main straight and down to Turn 2. You are a fair distance from the track, but if you have a DSLR with a long lens it’s a great place to get a photo, especially late in the afternoon with the sun behind you and the cars heading into the remaining daylight. If you’re feeling adventurous you can take a crack at panning with the cars coming through Turn 1. Panning is a great technique to capture the cars in motion. Using a slow shutter speed, follow a car through your lens, rotating (pan) in time with the moving subject and snap the shutter, continuing to move with the subject after you’ve pressed it. It’s a skill that takes practice but it can produce brilliant results, giving you a relatively sharp shot of the car but a blurred background and portraying a feeling of movement and speed. It can be a bit hit and miss as the cars are doing well over 200km/h through Turn 1 but when you do get a shot it looks spectacular. Try starting at 1/30 or 1/20 second and moving up or down from there. 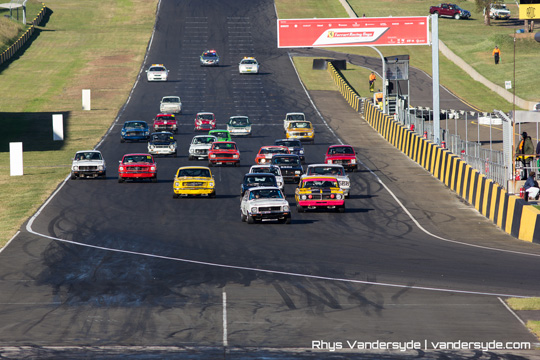 Between Turns 1 and 2 on the outside
This is another good area for panning as the cars are at speed and you can get a good speed shot as they approach the second turn. You’re a little further back from the track here but that can make the shot a little easier. You’ll need a long lens to get a tight shot (minimum 200mm lens) but with the grass bank behind as a back drop you can get some great looking green blur in the background. The light is often better here late in the afternoon.

Turn 2 from the east side of the track
The Turn 2 and 3 spectator area is one of Rhys’ favourite parts of the circuit. It’s close to the track and the fences don’t get in the way so you can get some really good shots here regardless of your camera. It’s also a great place to walk around a try plenty of different things.

Turn 2 is one of the slowest corners on the circuit, making it much easier to get photos. The exit of the corner is a great place to get a variety of images – you only need to walk about 10 metres to get a completely different angle on the cars. It’s also a particularly good place to get shots of the cars front on. You can get in close with even a medium length zoom. 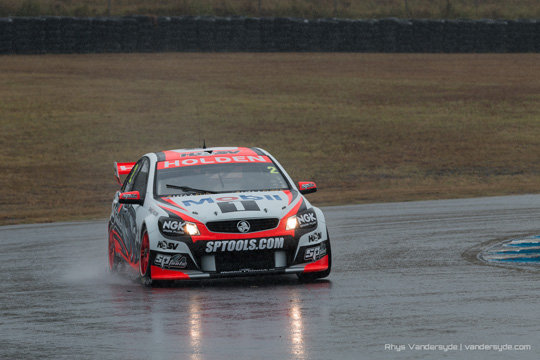 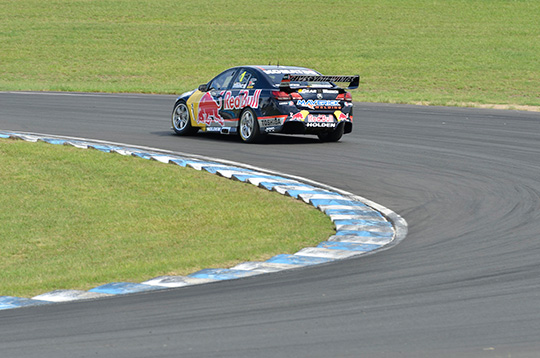 Between Turn 2 and 3 from the east side
The area between Turns 2 and 3 is probably the best view on the circuit. It’s a particularly good spot to get close to the track and shoot a full frame shot capturing more than one car as the pack comes around the corner and accelerates out of Turn 2. You can often see right into the cars here and view the drivers at work, so it’s good for ¾ shots – getting three quarters of the car (usually the nose and the side of the car) in the frame. 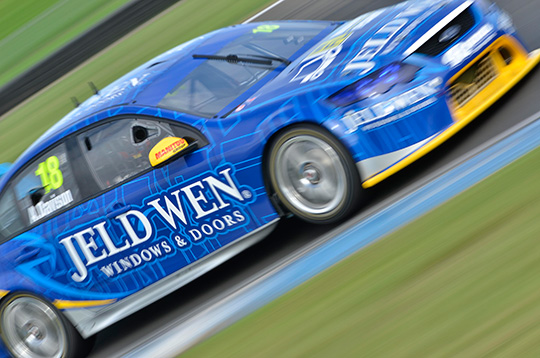 Turn 3 outside/east
Turn 3 is much the same, as you wander around the spectator area you are still nice and close to the cars, and again the fence is low so it’s easy to get uncluttered views of the cars. It’s another good spot to try panning too if you want to introduce some motion blur into your photos or get some ¾ shots of the cars again as the cars keep accelerating out of Turn 3 towards Turn 4. Near the marshal post is about as close as you will get to the black stuff and with a wider lens as you can get some nice backgrounds too. 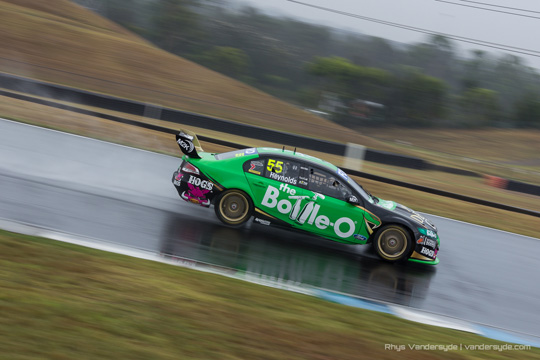 Turn 4 inside circuit (north side)
Turn 4 is another great spot to get some shots, however depending on the event you might need a paddock pass to get access to this spectator area. Between Turns 3 and 4, there is a great little spot behind the skid pad (where the support categories set up during major events) and here you can get a shot as the cars crest over the hill out of Turn 3 before they are hard on the brakes for Turn 4. If you place yourself in the right spot and time your shot right, you can get some great ‘sky’ shots here if you have a long lens, where the sky appears underneath the cars.

If you then wander up the hill a little bit and turn around, you can also get behind the cars and get a shot of them turning into Turn 4 as they brake and get back on the power through the long right hand corner. During the race it’s also great place to get shots of the cars diving down the inside trying to pass each other. You can also get flame outs, brake locks and the occasional car running wide. This is another spot that’s better later on in the day to get the light on the back of the cars. 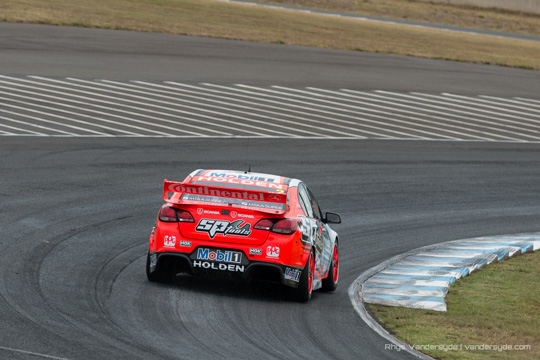 Turn 5 outside (south side)
With a reasonable length zoom Turn 5 is great for getting full frame and head-on shots as the cars come out of turn 4 and brake into 5.

Turns 5 to 6 outside (south side)
You get a good wide view of the circuit here, and you can get on the earth mount to shoot downwards onto the cars, but it’s not really a great spot.

Track access between Turns 6 and 17 is fairly restricted, so there’s not much point us talking about those areas, so instead we’re going to head on over to Turn 17…

Turn 17 and 18 outside (east) – (10 and 11 on the old circuit configuration)
The Turn 17 and 18 complex is another notable place to get some good shots, particularly in the morning when the sun is behind you. The fencing is low and you are high up compared to other areas of the circuit so you good views. You can get a good head-on view of cars coming out of Turn 15 along the short straight, through 16 and into 17 and it’s another great area to explore and experiment with your camera as there’s a variety of different shots you can take. Try practicing slow pans here or getting in tight with a long lens if you have one. If you have a DSLR with a long lens you’ll be able to get some photos of the cars up on the kerbs trying to make the kink and straight as possible. This is also a great spot to try and get some more panning shots as the cars are going relatively slowly before accelerating out onto the main straight. If you place yourself in the right spot you can also get the iconic race control tower in the background. As you move around this section of the track there is also a great opportunity to photograph the back end of the cars as they head down the straight. If you line it up right you can get the pit-lane complex and the grandstand in the shot as well. 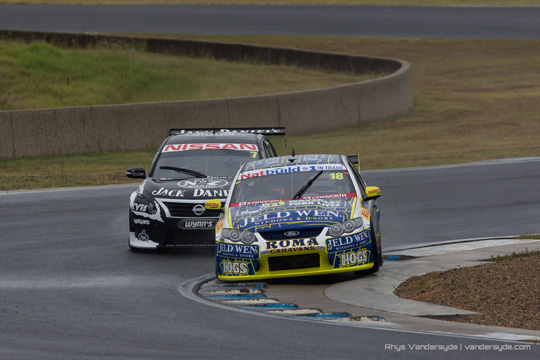 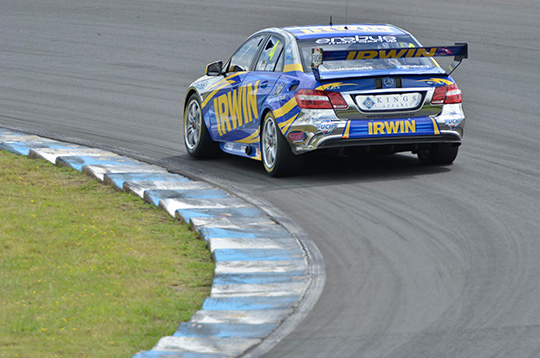 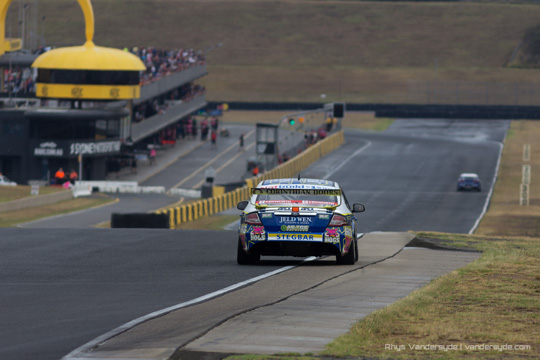 Front straight
The best place to stand is before the start finish line, but it all depends on how busy it is and whether you can find a spot! It’s the fastest part of the track so fast moving cars and panning chances are on offer. You’re also on an earth mount giving you a view down onto the cars. The view past the grandstand and into Turn 1 is very restricted by the high fence there so not the greatest place to shoot.

Paddock
If you are lucky enough to have a paddock pass, there are a few opportunities to get photos of the drivers as they go about their activities of the day, keep an eye out for autograph sessions, that’s the best time to see them for an extended period of time. Unfortunately you really can’t get any shots of the main cars in the pits (unless you are invited by one of the teams into their garage), but you can get up close with the support categories and see their cars up close.

However, you’re in luck this weekend as the track is being opened to fans on Sunday for the ‘True Colour’ track walk giving you the opportunity to get up close and personal with the stars and their cars. With the cars on the grid and the drivers coming out to meet their fans, make sure you have your cameras and mobile phones ready!