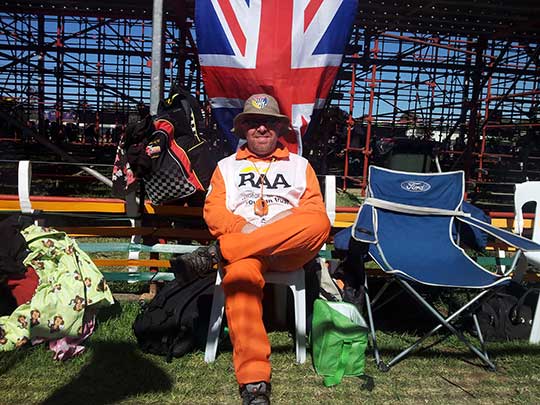 Graeme Fowler is a British motorsport marshal. An avid motorsport fan since 1982, he started marshalling in 2009, after watching coverage of the F2 racing from Brands Hatch and seeing the terrible accident in which Henry Surtees was killed. The way the immediate response was managed struck a chord with Graeme and the marshals and rescue crew made a huge impression on him That was the moment Graeme knew he wanted to get involved.

Now in his fourth year as a marshal, Graeme has done a broad spread of events – historics, club meetings, British Touring Car Championship meetings and his first British Grand Prix last year. His passion for the job has even taken him to Australia and he’s just come back from his first serious overseas event, the V8 Supercars Clipsal 500 in Adelaide! Here Graeme’s look back at a fantastic week…

Holidaying with the family in Australia in 2010, our return to the UK was scuppered when an volcanic ash cloud from Iceland closed European airspace for several days. As this harpooned the start of the UK motorsport season, the unexpected extension to our holiday gave me the opportunity to fit in a weekend marshalling at the Mallala circuit near Adelaide courtesy of SAMROA (the local marshals association). I kept in touch with them on my return which was to set in motion another trip down under…

The first meeting of the V8 Supercars season, the Clipsal 500 Adelaide is many people’s favourite round after the Bathurst 1000. It runs on about 75% of the iconic F1 circuit of the 1980s and 1990s. A mixture of parkland and street, none of the circuit is completely permanent, and it takes about eight months of every year to build and dismantle the walls, buildings, fences etc. The buzz around the place is immense. With that in mind I contacted the organisers in 2012 to ask about whether I could flag for the event in 2013. “Sure,” they said. “Send us your details”.

The reply came back quickly – “You’re in.”

Some time later, with flights booked I set off, with some trepidation. Luckily, I had some contacts there, who in the days before the meeting walked the (surprisingly compact) circuit with me (where we saw the Triple Eight Red Bull cars being unloaded and Ken Block’s WRC Fiesta being built), and organised a BBQ or two with me as a “guest of honour” – so I didn’t feel totally green when I got to the circuit for the meeting itself.

Day One arrived and after signing on, collecting lunch and listening to our briefing, I walked down to my point. I’d been put on 14.4L – the final point, just after the last turn and opposite the pit garages. This meant come race day the bulk of the grid would be in front of me and around 20,000 people behind me in a grandstand!

I met the marshalling team and endured the inevitable good-natured ribbing as the token “Pom”. Although there were two of us (the other being a very well known, very senior British marshal), I was the “New Boy” so it was my turn!

After this, the entire four day event passed by in something of a blur… we had the Monster FMX Freestyle riders (one of whom broke his leg), Ken Block hooning his Fiesta around, several drag displays (which were EARTH SHATTERINGLY LOUD) and that was just between sessions for the cars.

We were gelled together as a team very quickly by our Sector Marshal on the Thursday, who made it clear that we were not to stand in the sun all day, every day. Each duty (at this event, anyway) rotated so we weren’t on duty constantly. This meant I could muck in with the track team, help out with debris clearance, help recover support race cars, do some oil dressing, take some photos (not in the briefing, but I got some!) and importantly, stand in the shade. We were supplied with sunscreen at sign-on, and then with crushed ice, bottled water and Powerade during the day (by what they termed “The A Team”). Nobody, but nobody is a hardnut when it comes to sun exposure; the “slip/slop/slap” approach is observed by everyone and for bloody good reason!

There were immediate differences in how things are done in Australia as compared to the UK. The flag signals are different – they’re FIA [the global motorsport governing body] style rather than MSA [the UK governing body], so almost everything is waved and yellow flags are constrained to the post with the incident, unless race control ask the preceding post for one too. The hierarchy on post is different too, with a Sector Marshal covering all the track/ fire/ flag/ comms marshals in one sector, which could include several flag points as well. A lot of the differences made me consider how things are done over here; there are a few things I will be raising with my regional club committee which I believe could improve the way we operate our meetings.

As this was my first experience of a proper temporary street circuit, the proximity of the cars was both hugely impressive and slightly disconcerting at the same time. At one point whilst standing down, I had my lunch realising I was sitting no more than five metres from the thundering V8 Supercars in their practice session!

Soon enough, Saturday came. So did the paying crowds in the various grandstands, and so did the hospitality people in the suites opposite us on the pit garages – lots of them.

The support series were brilliant. There were the Aussie Racing Cars – like our Legends, 5/8 scale V8-style cars with 1100cc bike engines – lots and lots of them, chopping and changing positions like there was no tomorrow! There was the Australian GT Championship which included two Mercedes SLS racing cars which were almost universally acknowledged as porn for the ears, and it was lovely to see several Ginetta G50s including last year’s car raced periodically by Brit, Max Coates, in the UK Ginetta GT Supercup. One of the G50s had the most spectacular engine failure EVER when it left a massive cloud of oil & fuel behind, which then caught fire some seconds later and caught up with the car! There was the Porsche Carrera Cup – just like the UK version – loads of grunty, great sounding cars – though they really don’t like hitting walls! There was also the V8 Utes – imagine 36 Caterham 7s on the same grid, add a V8 engine to each one and watch the carnage! And then there was the Dunlop Series (the V8 Supercars development series) – last year’s V8 Supercars in the hands of the next generation of drivers, including one Casey Stoner with whom some of you may be familiar! He’s certainly familiar with the Adelaide walls now, having met one early in the meeting at some speed. His second race was far, far better.

This was, of course, the first meeting with the “Car Of The Future” in race fettle. It was also the first V8 Supercars’ meeting for many years where it wasn’t only Ford vs Holden, with both Nissan and Mercedes entries this year. The V8s have a reputation for sounding great, but the Mercs sounded like an F1 car on full chat. It’s a shame that they didn’t perform like that over the weekend though. Off the cars went for Race One, and Craig Lowndes blew the field away to win the first race of the new era for Triple Eight (ok, Red Bull Racing Australia) – the more things change, the more they stay the same!

Sunday was more of the same, except Shane Van Gisbergen ran a qualifying pole and lights-to-flag maiden victory for Tekno Autosports. Given his “retirement” and the relative performance of the new, unraced cars, this was an especially impressive drive. I think he’ll be one to watch this year.

As the cars returned to the pits at the end of race two, the crowd ran on to the track to get to the podium celebrations. Being on the start/finish straight as we were, this meant we had to pack down our point very quickly indeed to stop any “souvenirs” being taken (like flags, headsets, our bags, chairs and so on). There was a genuine air of excitement amongst the crowd, which rubbed off on us as we all made our way to the end-of event volunteers’ thank-you party. Much beer was consumed, laughter had, and I said my goodbyes.

So there it was, my first V8 Supercars event. It will not be the last, but I think my family may be negotiating over how many years it is before I go again!

It was an amazing experience during which I made several new friends, met up with some old acquaintances and learned a lot. Above all, however, I enjoyed it. As a volunteer in any motorsport environment that’s what matters – whether ankle deep in mud in the freezing rain at Donington (my home circuit), or basking in the sun in Australia – we do it because we enjoy it.