Skip to content
In the second of our two-part 2014 V8 Supercars season review by the numbers, we take a closer look at the performance of the Championship’s teams and the five marques represented on the grid. 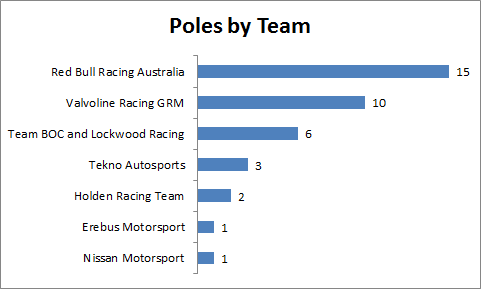 Red Bull Racing Australia may have topped the poles table, but it was Volvo’s remarkable return, as Valvoline Racing GRM, that really made people stand up and take notice. Between them Jamie Whincup and Scott McLaughlin took 20 of the 38 pole positions on offer and it was only Craig Lowndes’ five front row starts that made the difference.

While recent newcomers Erebus Motorsport and Nissan Motorsport both claimed poles this season, the biggest surprise was no poles at all for factory team, Ford Performance Racing – an issue the team will need to address if its to achieve anything in its final year with manufacturer backing. 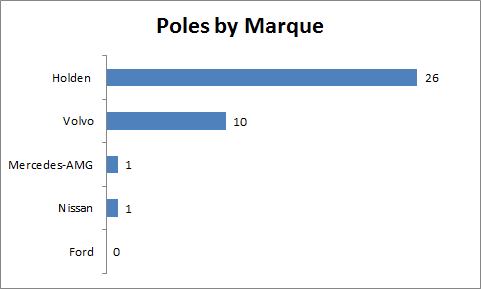 The last time a Ford failed to take a pole position in an Australian Touring Car Championship/V8 Supercars season was 1986! 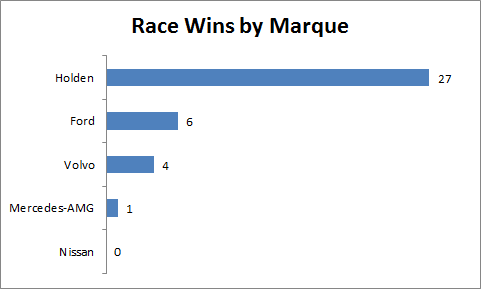 Of the 25 cars on the grid in 2014, eleven were Holdens, compared to only six Fords, four Nissans, two Volvos and two AMG Mercedes. But, despite a decrease from 16 cars in 2013, Holden’s fifth straight V8 Supercars Manufacturers’ title was wrapped up with five rounds spare, its 10th (of 15) since the trophy was introduced in 2000. Based on race wins, the award came after Shane van Gisbergen’s double-victory at Sydney Motorsport Park in August. With 20 victories, 15 more than arch rival Ford, the General Motors brand could no longer be caught. Holden picked up a further seven victories by the season’s end (see table below), while Ford could only manage one, albeit the biggest event of the year, the Bathurst 1000. It was Volvo however, that proved the season’s revelation. The Swedish marque won four races in its comeback season (in addition to its 10 poles), just two fewer than mainstay manufacturer, Ford. Despite a win at Winton in 2013, Nissan couldn’t repeat the feat in 2014, but privateer team, Erebus Motorsport gave Mercedes-Benz its first ever V8 Supercars victory in a hard fought race at Winton. 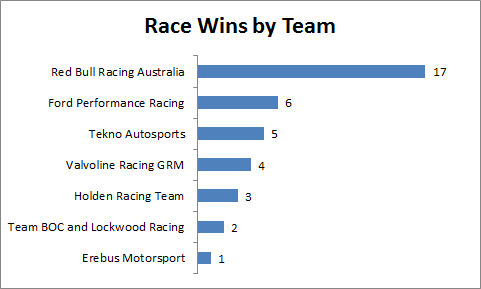 The top two race-winning teams, Red Bull Racing Australia and Ford Performance Racing, come as no real surprise, but the stand out results are Tekno Autosports’ and Valvoline Racing GRM’s season’s tally. Coming out with more race wins than the two car Holden factory team, single car team Tekno Autosports’ incredible season makes you wonder what it could achieve with two entries! And with David Wall behind the wheel of the second V60 Polestar in 2015, Volvo could be pushing the top two for next season’s honours. Having won five races in 2013, Lockwood Racing and Team BOC were the standout performers after the transition to the new generation V8 Supercars, but with only two victories in 2014 the Brad Jones Racing teams will be hoping to improve next year. 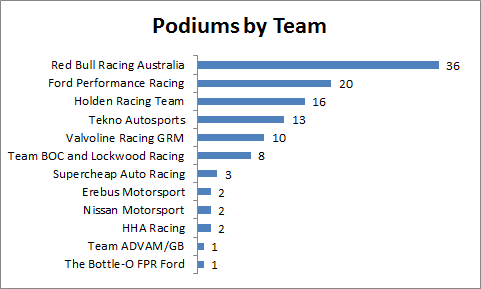 Hardly off the podium in 2014, it’s no surprise to see the Red Bull team top the chart. Despite the lack of race wins and pole positions, long standing rival factory teams Ford Performance Racing and the Holden Racing Team were regular top-three finishers and this consistency sees them where you’d expect. Again though, it’s Tekno Autosports whose podium count stands out. 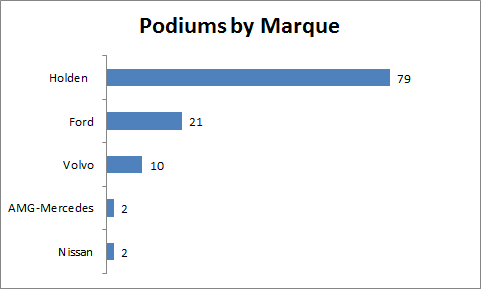 Jamie Whincup’s dominance saw Red Bull Racing Australia wrap up its fourth successive V8 Supercars Teams’ Championship in convincing style, 829 points more than nearest rival Ford Performance Racing. After heaping on the pressure in the first half of the year, the factory Ford outfit were once again left frustrated, finishing runners-up for a fourth straight season. In the battle for the highest positioned non-Ford/Holden team it was the Norton Hornets who came out on top in fifth. A strong finish to the season saw the Nissan outfit pull clear of the Valvoline Racing GRM team and Erebus Motorsport, but the three teams traded positions all season long. Tekno Autosports was the highest placed one-car team in ninth overall, just 528 points shy of two-car outfit Jack Daniel’s Racing.

So what lies in store for next season? Well, 2014 was another strong year for Holden and its teams, and Red Bull Racing Australia will likely remain as the target in 2015. But an incredible debut for the S60 Polestar exceeded all expectations and has laid the foundations for Volvo to mount a strong challenge on the Championship in 2015. Last year’s newcomers, Nissan Motorsport and Erebus Motorsport, continue to make strides, while the Ford teams will be hoping to better 2014 in a bid to attract backing from the Ford dealer network to replace the manufacturer funding. If 2014 is anything to go by, we are in for another cracker in 2015!

If you missed the first part of our season review you can find it here: The 2014 V8 Supercars Season in Numbers Part 1