In the first of a two-part end of season review we look back at all the stats that made up the 2014 V8 Supercars Championship and break down each drivers’ performance over another epic year.

Jamie Whincup proved once again he’s the man to beat asserting his authority on this year’s Championship and clinching a record-breaking sixth title, so it’s little surprise to see him top most of the tables. However, the Red Bull Racing Australia star didn’t have it all his own way…

The head to head comparisons always make for interesting reading. The obvious number that sticks out here is Scott McLaughlin’s complete domination over team-mate Robert Dahlgren. While it is no real surprise, given the Swede has not raced at any of the Australian circuits before, he has had to learn the hard way that this is one of the very toughest championships in the world, up against one of the sport’s most naturally gifted talents and the (equal) best qualifier of the season. Two other stats that stand out are FPR customer driver David Reynolds outscoring Chaz Mostert, and the two Norton Hornet Altimas in the hands of Michael Caruso and James Moffat beating team bosses Rick and Todd Kelly at Nissan Motorsport. If we break down the three four-car teams qualifying stats further, FPR’s Mark Winterbottom beat Ford Pepsi Max Crew team-mate 26 to 12, HRT’s James Courtney beat team-mate Garth Tander 21 to 17, while at Nissan Motorsport Rick Kelly got the better of older brother Todd 22 to 16 at Jack Daniel’s Racing and Michael Caruso beat Norton Hornets team-mate James Moffat 23 to 15. 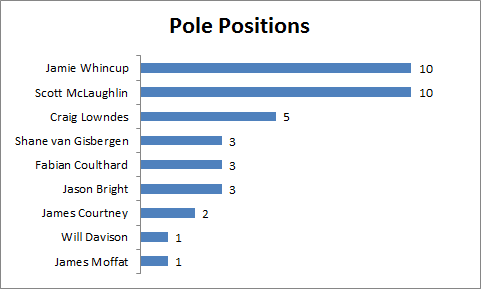 Tying on 10 pole-positions each this year’s Armor All pole award went to Jamie Whincup and Scott McLaughlin. However, the trophy went to the newly crowned champion after a second place count-back. While the 31-year-old also surpassed Peter Brock’s record for most pole positions in V8 Supercar-Australian touring car championship history taking his tally to 60, McLaughlin’s ten poles, the last coming ahead of the final race of the season were an unprecedented achievement, having never previously qualified a V8 Supercar on pole position in the main game or Dunlop Series. 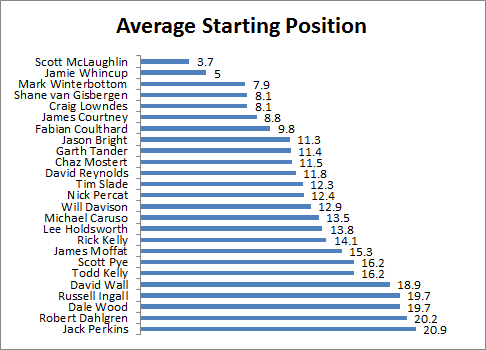 Though Jamie Whincup won the pole award trophy for this year, it was young gun Scott McLaughlin that had the best average starting position of the year, over a place better than the six-time champion. Despite Ford Performance Racing’s season-long lack of qualifying pace, Mark Winterbottom’s consistency throughout the sessions puts him as the third best average starter, the highest of anyone that didn’t claim pole. Michael Caruso was the best of the Nissan’s in 15th while Lee Holdsworth was the best Erebus, coming home as the 16th best starter on average.

Over the course of the 38 Championship races there were 11 different winners following on from the 13 that won in 2013. 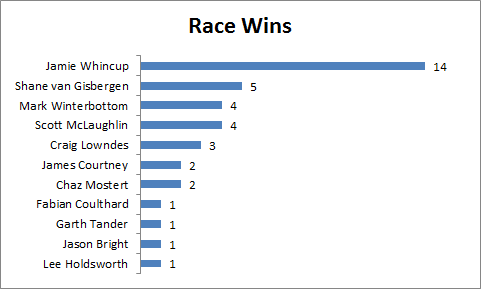 One of only three drivers to finish all 38 races this year Jamie Whincup dominated the win ratio. After a shaky start to the season he went on to pick up 14 wins (one short of his personal record of 15 in his first title year of 2008) almost three times that of second placed Shane van Gisbergen. 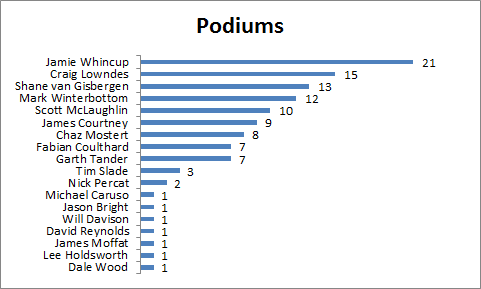 Again it’s Whincup topping the podium stats, six clear of team-mate Craig Lowndes and eight clear of Shane van Gisbergen. It’s worth pointing out Whincup also punched out 29 top five finishes and 34 top 10 finishes. It’s this consistency that saw him win his fourth straight championship, joining Ian Geoghegan in the record books as the only two men to achieve this feat, and cemented his place as the most successful driver in Australian touring car history. 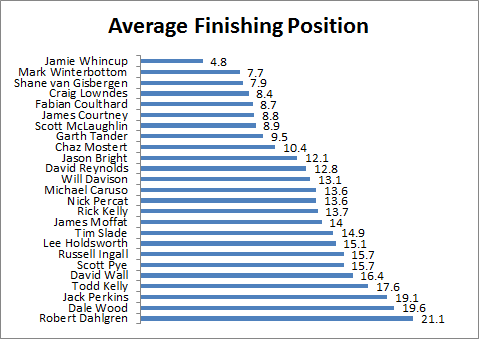 The stats show that no matter how you look at it, Jaime Whincup was the best finisher of the year. His average finishing position of 4.8 was nearly 3 positions higher than championship rival Mark Winterbottom. Interestingly, Shane Van Gisbergen had a lower average finishing position than Winterbottom, despite beating the Ford man to 2nd in the championship and having a 25 point penalty. Scott McLaughlin was again the best of the non-Australian manufacturers with Will Davison being the best of the Erebus duo and Michael Caruso again being the best Nissan driver. 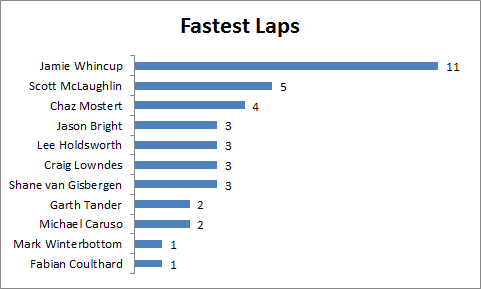 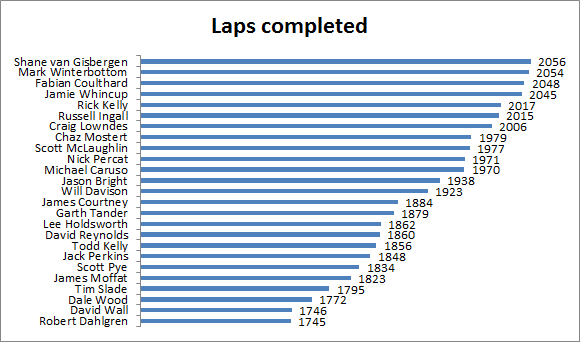 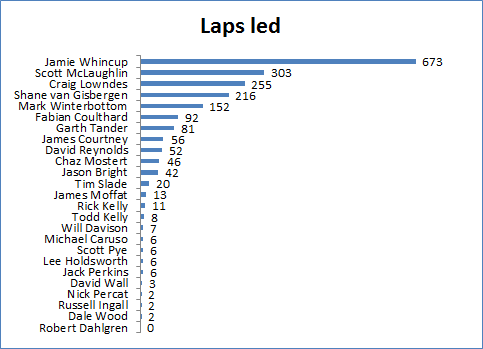 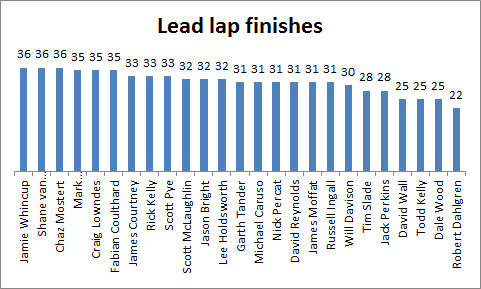 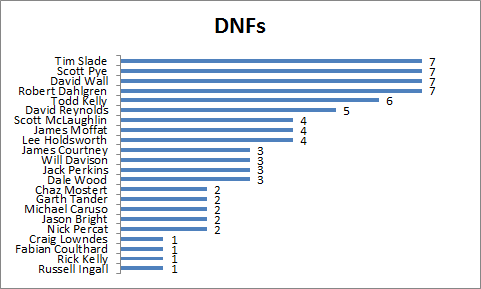 2014 proved to be an exciting season with five manufacturers on the grid. Jamie Whincup breezed to his sixth championship in seven years, Shane van Gisbergen proved to be the best privateer since the days of Glenn Seton, and Mark Winterbottom was left to ponder on what could have been. It was also a year of firsts with Erebus’ first V8 Supercars win, Volvo’s first time on the top step of the podium since 1986 and, after over 20 years, Paul Morris’s first victory at Bathurst. If last season is anything to go by, 2015 should be a cracker of a year with the rise of Scott McLaughlin and Chaz Mostert as well as the return of Marcos Ambrose.

Part two of our 2014 V8 Supercars season in numbers review, which breaks down teams’ performances will be on the site soon. If you’re not doing so already follow us on one of our social media channels and we’ll let you know when it’s up on the site.