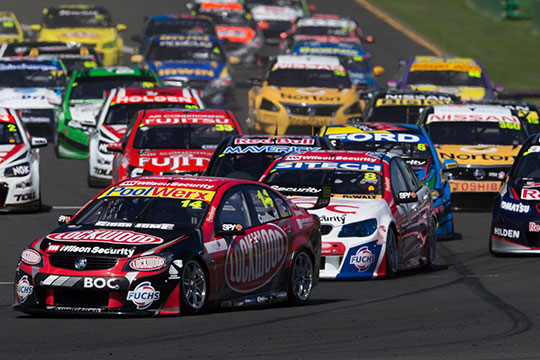 After the season opening event in Adelaide, the V8 Supercars return to action this weekend at Melbourne’s Albert Park circuit as support to the 2014 Formula 1 Rolex Australian Grand Prix.

Since its move from Adelaide in 1996, the V8 Supercars have appeared on the Australian Grand Prix bill every year, bar 2007. 2014 marks the 18th running of the V8 Supercars at Albert Park, with 52 races held over this period.

For the second year in a row, the MSS Security V8 Supercars Challenge event features a four-race sprint format and again the V8 Supercars will use the non-Championship round to trial new formats.

All four races will incorporate a double-file rolling start, the first time the Series has used the procedure for its races, while drivers will also line up side-by-side for any safety car restarts.

The rolling start format was used in the second leg of the 60/60 Super Sprint races in 2013, but plans for double-file Safety Car restarts were scrapped after drivers expressed concern that it would cause unnecessary carnage at some circuits. Indeed,controversy reigned over the new single file restart system used at this year’s Clipsal 500 which saw five cars taken out of contention.

Jason Bright, who came off worst in the Adelaide restart after being tipped into a spectacular double roll will debut a new car in Melbourne. Brad Jones Racing raced the clock to complete the rebuild in just eight days, avoiding a fine for missing the event.

Chaz Mostert’s Pepsi Max Crew Ford Falcon was also severely damaged at Adelaide and Performance Racing will utilise a spare chassis for the weekend. While Mostert’s car is repairable, the Ford squad have opted to use David Reynolds 2013 car rather than rush the repair job, however he is expected to be back behind the wheel of the ex-Will Davison car for the Tasmanian round at the end of March.

A single qualifying session on Thursday determines the grid for the first race on Friday, while the grid for subsequent races will be decided by a rolling points system. 75 points will be awarded to the winner of the first three races while 150 points will be on offer for the winner of the final race, the same format introduced for the final race of this year’s F1 world championship in Abu Dhabi. Points accumulated over the four races determine the event winner.

Russell Ingall is the most successful driver with eight race wins to his name. In all 18 different drivers have claimed race victories, 11 of these drivers will be on the grid this weekend.

The Albert Park street circuit first opened in November 1953 and was constructed around a man-made lake a few kilometres from Melbourne’s CBD. A public road for nine months of the year, the 5.30 kilometre circuit features 16 turns.

Drivers consider the fast and flowing circuit as relatively easy to master. Its consistent placement of corners allows them to easily learn the track, but overtaking opportunities are limited.