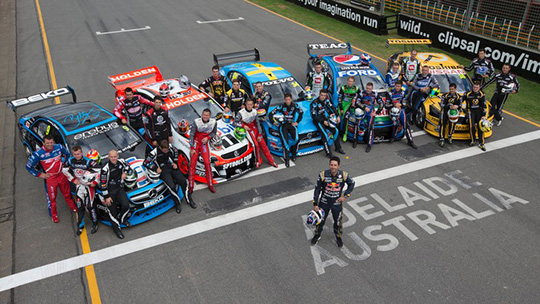 The 2014 V8 Supercars Championship roars to life this weekend as 25 cars take to the streets of Adelaide for the always thrilling Clipsal 500.

A mainstay on the calendar since 1999, the Clipsal 500 Adelaide is the traditional season opener and the perfect launch pad for the V8 Supercars Series.

The Adelaide event has used a number of formats in its 15 year history. The first event in 1999 consisted of a single 500 kilometre race with an overnight break at the 250 kilometre mark. When a number of high profile drivers retired rules were altered on the Saturday night to allow them to start the race on the Sunday.

Originally dubbed the ‘Sensational Adelaide 500’, the 1999 event boasted a crowd of 162,000 over three days. The following year Clipsal came on board as naming rights sponsor in an agreement which continues to this day. In 2002, the Clipsal 500 was shifted in the calendar to become the season opener, and with the exception of 2010 and 2011, has retained its season opening status.

A number of drivers have mastered the Adelaide streets scoring multiple wins on one of the toughest circuits in Australia. Defending champion Jamie Whincup leads the way with seven victories including back to back clean sweeps in 2008 and 2009. Triple Eight Race Engineering teammate Craig Lowndes sits second with six races wins after his commanding victory on the Saturday last year. Former Ford star Marcos Ambrose took five race victories during his V8 Supercar career, while Holden stars Garth Tander and Mark Skaife are the only other multiple winners on the streets of Adelaide with three and four wins respectively.

Although the winner of each race is recognised individually and the results of both races count toward the Championship, the driver who claims the Sunday race is declared the Clipsal 500 champion. 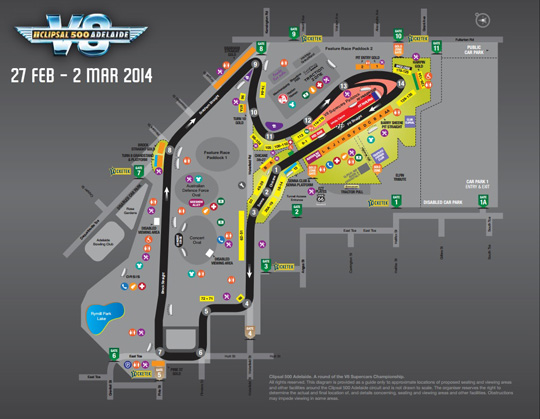 Originally used for Formula One between 1985 and 1995, the Adelaide Street circuit covered a distance of 3.78 kilometres, but was shortened in 1999 for the V8 Supercars. The track comprises of 14 turns, including the famous turn eight. Approaching the turn at close to 200km/h there is little margin for error. If the car drifts over the kerb and off the racing line the consequences can be severe. In 2008, during a Development Series race Ashley Cooper was killed after colliding with the concrete wall as he exited the street circuit’s fastest turn.

Another area of interest is the kerbing at turn two. Drivers are required to respect the limits of the track through the chicane and those who place four wheels over the edges of the track will trigger the sensors. A variety of penalties exist for those who are caught shortcutting. During practice and qualifying drivers will have their lap times deleted, however, in the race a driver will be given two warnings. Should they be caught a third time they’ll then be shown a Bad Sportsmanship flag. A fourth transgression will result in a pit lane drive through penalty, after which the count resets.