With the fight for Championship points at a premium, the V8 Supercars head to Sandown Raceway to tackle the first of this season’s endurance races and the opening leg of the inaugural Pirtek Enduro Cup – the Wilson Security Sandown 500.

With 300 points available and nine drivers within 245 points of the Championship lead, the 2013 Wilson Security Sandown 500 weekend will be decisive for a few reasons. The Endurance format requires co-drivers which can add an element of unpredictability to the event. The Sandown 500 also includes two 60km ‘Qualifying Races’, one for the regular season driver and one for the endurance co-driver. The finishing order of the Co-drivers Qualifying race sets the grid for the regulars’ race which in turn sets the grid for Sunday’s 500 km race.

New for 2013 teams can now select drivers to compete across all three events. Of the endurance pairings, eleven remain the same from 2012 with five drivers making their 500 debut, including Dunlop Series driver Ash Walsh, who makes his main game debut. The other debutants being Maro Engel, Marc Lieb, Jeroen Bleekemolen and Chaz Mostert. There is also a great deal of experience in the field with nine former Sandown 500 winners lining up on the grid. Three are acting as co-drivers, Greg Murphy, Greg Ritter and Warren Luff. The remaining six are full timers, Jamie Whincup, Craig Lowndes, Mark Winterbottom, Todd Kelly, Jason Bright and Russell Ingall.

Another key factor is going to be reliability of the new machinery. This will be the longest continuous run for the new Car of the Future to date on a circuit renowned for being been hard on brakes and drive train components. Added to this, is the Board of V8 Supercars’ decision to implement a minimum of four compulsory pit stops for all cars in a bid to address the ongoing fuel parity debate.

The Melbourne circuit currently holds the record for the most Australian Touring Car Championship/V8 Supercars events held and hosts its forty-third event this weekend, having held its first endurance race in 1964 – the Sandown Six Hour, won by Roberto Bussinello in an Alfa Romeo.

The weekend could see more history made as Red Bull Racing Australia’s Craig Lowndes seeks to equal the late Peter Brock’s record of victories in the 500. Brock holds a total of nine wins at Sandown Raceway. However, Lowndes, who has finished on the podium in the last eight 500 kilometre events, has spread his eight wins across three circuits, five at Sandown (1996, 1997, 2005, 2007, 2012), two at Phillip Island (2010, 2011) and one at Queensland Raceway (2000).

Two milestones that will definitely be reached this weekend are Fabian Coulthard making his 100th event start after debuting at Oran Park in 2004 and Triple Eight Race Engineering celebrating their tenth anniversary on Saturday (September 14). The Triple Eight outfit, originally from Britain bought out Briggs Motorsport in 2003, and have gone on to claim four of the last five drivers’ championships, 108 wins (including five Bathursts) and 65 pole positions. 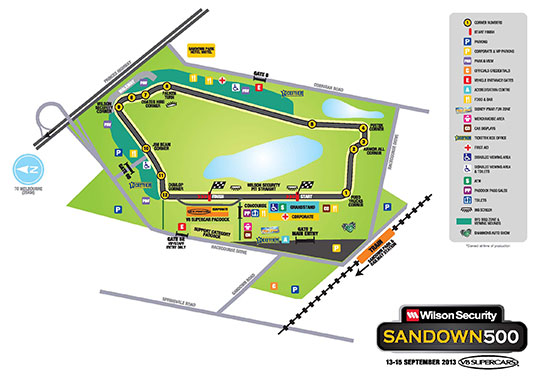 Set around a horse racing track in Springvale (about 30 km from Melbourne’s CBD), Sandown International Raceway has produced some thrilling races over the years. 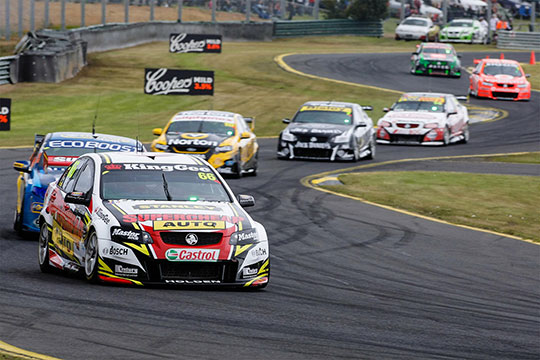 It’s a fast and challenging circuit with a total of thirteen corners. A high-speed downhill section at the end of the back straight leads into the ‘esses’ section, two slow corners considered one of the best sequences of corners in the championship. The car must be set up to handle the high-speed directional changes and bumps in the braking zone before putting its power down onto the long front straight.

Sunday:
1 x 20 minute Warm-up
1 x 500 km Race (161 laps)
Each driver must complete a minimum of one-third race distance – 54 laps. There will be a minimum four compulsory pit stops for all cars, but expect more with variable weather and Safety Car deployments likely.