With the Championship going down to the wire, the streets of Sydney Olympic Park play host to the most hotly contested V8 Supercars title decider in recent years – the Sydney NRMA Motoring and Services 500.

The Sydney 500 will see one driver stand above all and claim the 2013 Drivers championship.

With four drivers still in with a mathematical possibility of claiming the title, the stage is set for the championship contenders to battle it out until the chequered flag on Sunday. And with the Sydney 500 the first event to trial the twilight race format, with the Saturday race set to start at 5:10pm and finish at 7:30pm, this is an event not to be missed!

Leading the championship charge is Red Bull Racing Australia’s Jamie Whincup. The four-time series champion (2008, 2009, 2011 and 2012), Whincup is on the hunt for the hat-trick and holds a 20 point lead over team-mate Craig Lowndes. Three-time series champion (1996, 1998 and 1999), Lowndes is hoping 2013 will end his Championship drought. Sitting third and 124 points behind Whincup is Pepsi Max Crew FPR’s Mark Winterbottom. Fellow Pepsi Max driver Will Davison is 223 points from the lead, with both FPR drivers searching for their maiden championship titles.

Following injuries sustained in the Saturday accident at Phillip Island, Holden Racing Team’s James Courtney has pulled out of competition in Sydney due to a fractured tibia. He will be replaced by HRT endurance driver Nick Percat, who makes his first solo start in the main series and who will make his full-time main game debut in 2014. Percat took to Melbourne’s Calder Park Raceway earlier this week to shakedown the replacement chassis after extensive damage to Courtney’s car in the turn four collision.

This weekend will also be the final time we’ll see the Gary Rogers Motorsport team race with Holden Commodores. It was announced earlier this year that GRM will switch to Volvo in 2014.

Maro Engel will also pilot the #9 SP Tools Racing Mercedes-Benz E63 AMG V8 Supercar for the last time this weekend. In the New Year he will vacate his V8 seat and switch to GT racing with Erebus Motorsport, after the team announced it will scale back to two cars in 2014. 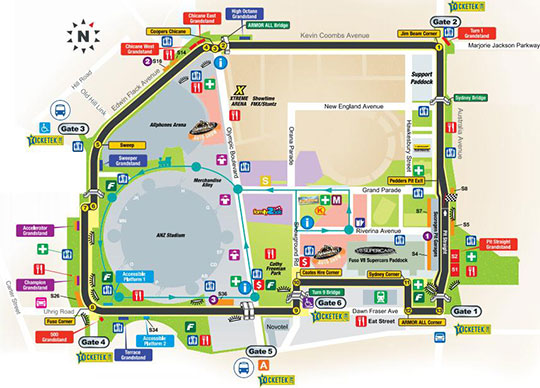 The Homebush street circuit winds its way around the Sydney Olympic Park facility, originally built to host the 2000 Olympic Games. Five time series champion Mark Skaife helped design the race track, dubbed the concrete canyon which was used for the first time at the final round of the 2009 Championship, the inaugural Sydney 500. The 13 turns feature a mixture of fast and slow corners and a variety of track surfaces. Coupled with a less than smooth track and changes in the camber around the circuit make pulling off the ‘perfect’ lap difficult. The track also houses both the widest (Australia Avenue) and the narrowest (Edwin Flack Avenue) sections of track on the calendar.

In the short history of V8 Supercar racing at Sydney Olympic Park, the circuit has developed a reputation for carnage and is notoriously difficult to crack.

Compared with other street circuits it has the lowest finishing percentage, with only 68 percent of the field finishing (since 2009).

Strategy plays a big factor in achieving success at Sydney. Generally the race is run on a two-stop strategy, similar to the season opening Clipsal 500 in Adelaide. However, with the high instance of safety car intervention (not one race has been run at Sydney without a safety car), a three-stop race can sometimes work, providing a Safety Car deployment falls in the right window. Congestion in pit lane is also an issue with the long transit time sometimes causing cars to be queued as they travel to or from their pit bays. Over the course of the eight races run there, Craig Lowndes is the only repeat winner, taking victory in the Saturday races in 2011 and 2012. 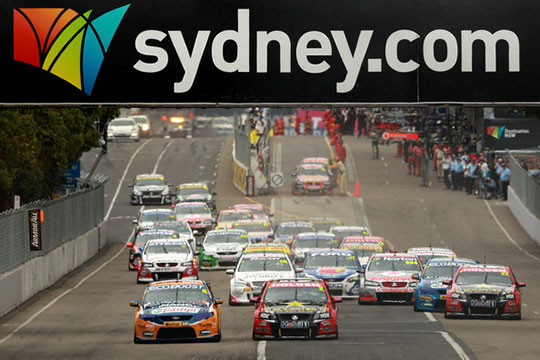