The waiting’s finally over. This weekend the Championship converges on the fearsome Mount Panorama circuit for the undisputed jewel of the V8 Supercars calendar – the Supercheap Auto Bathurst 1000.

The second event of the inaugural Pirtek Endurance Cup will see 29 cars, 58 drivers and 12 teams battle it over 161 punishing laps in the fight to be crowned the next Kings of the Mountain and hold the Peter Brock Trophy aloft.

Last year V8 Supercars celebrated fifty years racing at Mount Panorama and the race was won by Triple Eight Race Engineering’s Jamie Whincup and co-driver Paul Dumbrell, the former holding off a fast closing David Reynolds in the Bottle-O Ford by just three-tenths of a second. 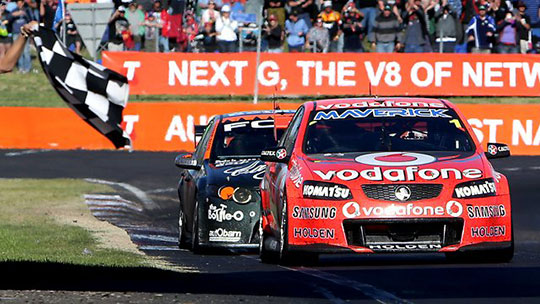 Having won ten of the last twelve races at Bathurst with five-a-piece (and 13 of a possible 24 podium positions), Triple Eight Race Engineering and the Holden Racing Team remain the team to beat; but, as has proven time and time again Mount Panorama can be very unforgiving. The Championship is as close at it has ever been and with 300 points on offer and less than that separating the top six drivers in the standings, conquering the mountain takes on even more significance.

Looking to overturn the two Holden teams’ Bathurst stranglehold is Ford Performance Racing. Despite six front-row starts over the past seven years, including three pole positions, the Ford factory outfit is still looking to claim its first victory at Mount Panorama.

Holden too is looking to break a record of its own. A win this weekend will mark its 30th Bathurst 1000 victory.

Lining up for his 500th V8 Supercars/ATCC race start and his 20th start on the mountain, five-time Bathurst 1000 winner Craig Lowndes could also make history again this weekend. After overtaking Mark Skaife to become the all-time leading race winner in V8 Supercars/ATCC history, another podium finish will see him equal Peter Brock, Larry Perkins and Jim Richards for the record of most podiums in the history of the Bathurst 1000 with 12 each. Lowndes certainly has great form at Bathurst; in the past ten years he’s finished on the podium eight times, including four victories (2006, 2007, 2008 with Jamie Whincup and in 2010 with Mark Skaife).

This year, Mount Panorama also welcomes back Nissan and Mercedes Benz. The last time a Mercedes-Benz lined up in the Bathurst 1000 was 1994. In seven appearances, the best result came in 1986 when Denny Hulme and Franz Klammer finished ninth outright (and second in class). It’s been 15 years since Nissan last competed in the endurance race, when Steve Richards and Matt Neal finished second in a Primera in 1998 in the two litre Supertourers. However, it’s 21 years since Nissan last competed in the ATCC with the legendary Nissan ‘Godzilla’ GT-R having won twice at Bathurst in 1991 and 1992. 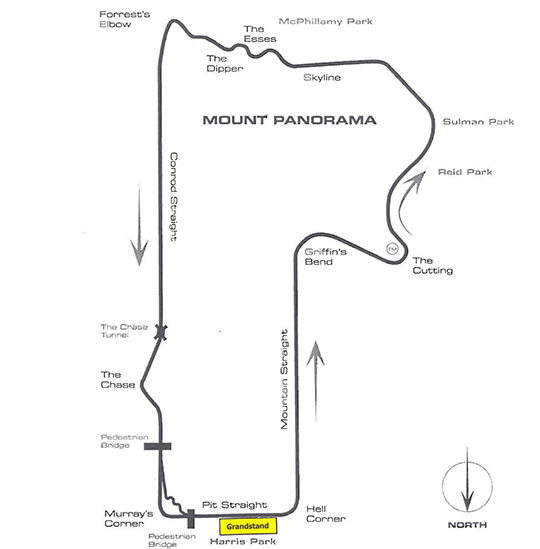 The Mount Panorama circuit, which celebrated its 75th anniversary in March this year, is located just outside of the rural New South Wales town of Bathurst. Originally constructed as a scenic tourist drive in 1938, the track is a public road for the majority of the year.

Every year thousand of fans make the pilgrimage to watch ‘The Great Race’ around the legendary 6.213km circuit’s 23 wild corners and fast straights. It’s the most demanding track in Australia – very hard on engines and very hard on brakes – with massive rise and fall and little room for error. With an average speed of 178km/h, it’s also the fastest of all the circuits in terms of the speed average with more than half of each lap spent 100% fully on the throttle.

Conrod straight is the fastest section of the track, with V8 Supercars previously reaching speeds of just over 300 km/h, but should a decision to make changes to the standing drop gear ratio be made after the weekend’s first practice session, a taller ratio could see top speeds of 310km/h, putting Greg Murphy’s ten year-old 2:06.8594s ‘Lap of the Gods’ qualifying record and Jamie Whincup’s race lap record (2:08.4651s) under serious threat.

Bathurst is a very difficult place to pass but the best sections for overtaking are generally considered to be at Hell Corner (turn one), out of Mountain Straight and into Griffins Bend (turn two) and The Chase (turn 20), the fastest bit of track in Australia around the right hand kink leading up to the last corner.

Sunday:
1 x 20 minute Warm-up
1 x 1000km Race (161 laps)
Each driver must complete a minimum of one-third race distance – 54 laps. There will be a minimum seven compulsory pit stops for all cars, but expect more with Safety Car deployments likely.