This unique event comprises of two 300-kilometre (186-mile) street circuit races set against the backdrop of one of the most famous beach-side cities in the world, the Queensland resort town of Surfers Paradise. But, despite an ‘all-star’ line-up, this is certainly no exhibition race. Co-driver selection is crucial. Results count and Championship points are at stake.

The Gold Coast 600 is on every driver’s radar. Despite the date clashing with a host of international categories including the World Touring Car Championship, DTM, British Touring Car Championship and the NASCAR Sprint Cup, the invitational event, the third (and last) endurance event on the V8 Supercars calendar has still attracted some of the world’s best open-wheel and sports car drivers. Check out the line-up here. 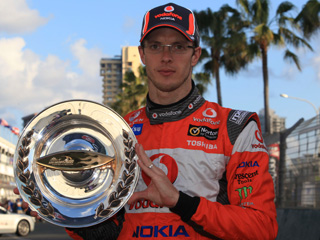 As well as competing for the famous Gold Coast 600 surfboard trophies, the international co-drivers will all be chasing the Dan Wheldon Memorial Trophy. Created in Wheldon’s honour after his tragic death at the Las Vegas Indy 300 the week before the 2011 event (24 hours before he was scheduled to fly to Australia as part of the Toll Holden Racing team) the trophy is awarded to the international driver with the best overall performance during the weekend.

Of the 28 international co-drivers:
13 have competed in the Gold Coast 600 before, in either 2010 or 2011 or both.
14 are making their V8 Supercar debut on the Gold Coast (marked * in line-up).
1  – Nicolas Minassian – returns after a gap of 9 years having driven at Sandown and Bathurst in 2003.
12 nationalities are represented on the grid.

Of the 28 regular V8 Supercars drivers:
3 make their first start on the Gold Coast in the category – David Wall, Tim Blanchard, Taz Douglas. 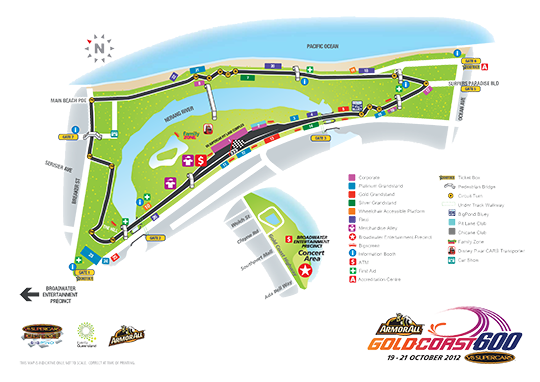 The temporary 15-turn street circuit features high-speed chicanes and tight corners, all lined with solid and unforgiving concrete walls, ready to punish any errant driving. Straying from the racing line can lead you straight into trouble. And this year V8 Supercars has increased the size of the chicane kerbs to address kerb-hopping after a controversial end to last year’s race which saw the electronic detection sensors disabled and chicane bollards removed allowing drivers to effectively straight-line the chicanes.

Each V8 Supercar regular driver is required to partner with an international co-driver. The internationals must complete 1/3 of the race distance (34 laps) in each of the 300km races.

Friday Practice:
On-track action begins on Friday with a total of four 40 minute practice sessions, two for all drivers and two for international drivers only.

Saturday Qualifying:
Qualifying on Saturday for Race One consists of a 30 minute, all-in session with the fastest ten progressing to a top ten shootout.

Saturday Race One:
300 km (102 lap) race with the international co-driver needing to complete a minimum of 34 laps.

Tyre Regulations:
New tyre regulations for 2012 mean that the Armor All Gold Coast 600 is the only race on the calendar to be conducted on soft tyres-only.

2011
The international co-driver rule was adjusted so that every regular series driver (each car) would have an overseas driver of international repute as a co-driver for the weekend.

Following the tragic death of British IndyCar star Dan Wheldon at the Las Vegas Indy 300 the week before the 201 Gold Coast event, the international reputation rule was slightly relaxed to allow Richard Lyons to take the place of Will Power, who was injured in the same crash in Las Vegas and Allan Simonsen to replace Tony Kanaan who withdrew following Wheldon’s death. Rules state that co-drivers for the Gold Coast race could not compete in either of the two other endurance rounds (L&H 500 Phillip Island or Bathurst 1000), but due to the short lead-up time Lyons and Simonsen, despite having competed in both were given dispensation to compete at Surfers Paradise (Darren Turner took the place of Wheldon alongside Toll Holden Racing’s James Courtney).

As a tribute to Wheldon, the trophy awarded to the international driver with the best overall performance during the weekend, was renamed the Dan Wheldon Memorial Trophy.

Sébastien Bourdais became the first driver to win in an IndyCar and a V8 Supercar on the Gold Coast by partnering Jamie Whincup to victory on the Saturday. A second-place on Sunday landed the Frenchman the Dan Wheldon Memorial Trophy.

2010
In 2010, the track was shortened from 4.47km to 2.8 km to “give the fans increased opportunities to see V8 Supercars in action, better racing and more passing opportunities”.

Prior to 2009, the most common race format was three races over the weekend, with one on Saturday and two on Sunday. The driver with the most points accumulated over the three races was awarded first place for the weekend.

2009
In 2009, V8 Supercars took over as the headline act following the departure of IndyCars and the absence of the A1 GP series which had pulled out of the event the previous week.

To compensate for the loss of the A1 GP, the event format changed with the V8 Supercars switching to a 600km (370 mile) format made up of four 150km (93 mile) races, two on Saturday and two on Sunday. The amount of points accumulated over the two legs determined the individual winner for each day.

1994 – 2001
There’s been racing on the streets of Surfers Paradise for the past 22 years, but 1994 marked V8 Supercars’ first appearance (when they were still known as Group A Touring Cars) and, although they were absent in 1995, they’ve been on the bill every year since.

Between 1994 and 2001 the V8 Supercars ran as a non-championship support event, before making the switch to an official point-scoring round in 2001.