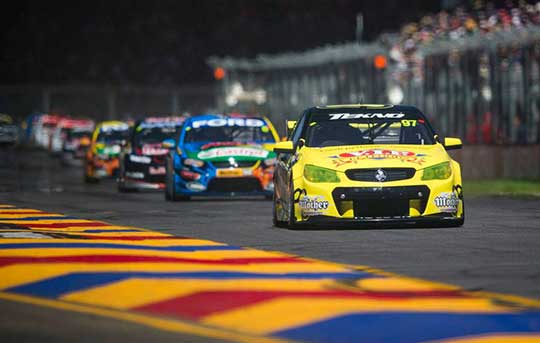 All the 2013 V8 Supercars liveries as they are unveiled ahead of, and during the new Championship Series season…

There are guys here at DJR who were part of the fabulous era with the Shell Falcons and Sierras. We all were very proud to see the Shell Pecten back on the flanks of the #17 Falcon once again. It has been a great relationship over many, many years.

Darrell Lea is a great partner for TEKNO and it is fantastic for us to now have full season backing for both of our V8 Supercars. We’ve known the Quinn family for a long time and we appreciate them taking the initiative in supporting us. We’re proud to have strong Australian brands such as VIP Petfoods and Darrell Lea behind us. We started well at the Clipsal 500 and are looking forward to continuing that success through the rest of the season. This new partnership makes the great start to the year even sweeter.

It will be a long journey to the top of such a competitive racing series, but I know I have good equipment. Not many drivers have the opportunity to debut at their home circuit, so it’s quite surreal that I have the chance to race in front of my home crowd this weekend.

I’m really happy with the way the #3 car looks this year. When you have quiet a few big partners, it’s not an easy task to squeeze everyone on, but I reckon we’ve come up with a look that suits all. It’s nice and bright, clean and sharp. The look of our car might be simple, but on the track, I think its going to look really good.

I really like the look of my car. The extra black, especially on the wheels, makes it look really mean.

The designers of both the car and livery have got it dead right. The VF Commodore is a great shape to work with as a race car. It really ticks all the boxes – it’s the best looking car I’ve seen since I started racing in the category in 1996.

I am super pumped about stepping up to a full factory program with Nissan, and to continue my long relationship with Norton, it’s fantastic.

In these situations at the start of a year, especially when you have to build all new cars and new team, you never really realise what you’ve achieved, and you don’t really feel what you’ve entered into until you pull the covers of the car at the launch every year. To pull the covers off the car and see the Jack Daniel’s signage, with all the drivers standing there in their Sunday shirts for the first time and the actual car in its livery, especially with the Nissan badge, really hits home.

We had a lot of feedback from our supporters who wanted to see the Lion back on the bonnet, and it’s great to be in a position where we’ve been able to do that.

The new cars are a credit to the dedication and commitment of the crew.

This is certainly the wildest looking race car I’ve ever had but to think I had a part in designing it is really neat and it is a fresh approach by a factory team.

It is great to finally reveal the look of my race car for the new season as it means we are getting close to going racing.